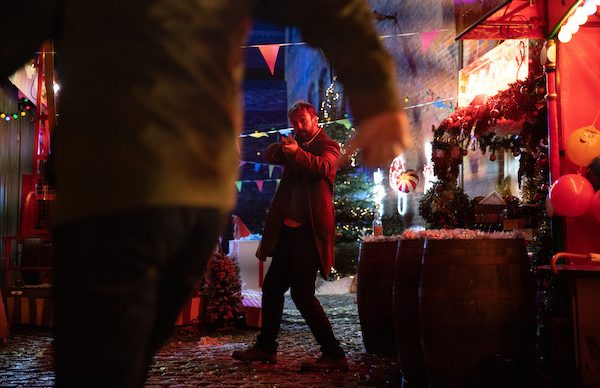 Someone is fatally shot

Fans of Coronation Street have been left “heartbroken” and “excited” in equal measure, after watching the first teaser trailer for the explosive Christmas episodes.

The preview clip – which comes in at 2.40 minutes – shows Rita’s tragic fall, alongside footage of the terrifying armed siege which will leave one Weatherfield resident dead.

The trailer shows Derek Milligan on a shotgun rampage through Winter Wonderland, and Gary Windass is his target…

Holy moly… This is some trailer. I’m hooked.

We know at least one person is fatally shot, but is it Gary? Or is someone else caught in the crossfire?

While the trailer, obviously, doesn’t reveal the victim, we do see Derek open fire in scenes which are set to be some of the most dramatic in the soap’s history.

The short preview shows Shona Platt hiding among the decorations waiting for David to find her as the reward for his birthday treasure hunt.

But will her surprise end in tragedy?

We also see armed police on the Street, pregnant Maria running towards her boyfriend Gary, and several of the residents in grave danger.

John Stape’s daughter Jade also returns and is seen plotting against Fiz, Adam proposes to Sarah, while Michelle and Robert have a violent showdown and poor Corrie veteran Rita Tanner takes a nasty tumble at home.

Reacting to the trailer, one fan wrote: “The Rita storyline is already breaking my heart.”

Another said: “Holy moly… This is some trailer. I’m hooked.”

A third added: “Can’t wait the trailer looks so good!”

“Wow, literally cannot wait for these eps to air now! Genuinely buzzing,” said one more, while another gushed: “This is brilliant!!!!! Going to get my popcorn ready and have a dramatic Christmas once and for all. Well done you did it again!”

Some predicted Shona could be the victim of the shooting, and others thought perhaps Maria might be the one to die.

Many others begged Gary or Geoff to be the characters who don’t survive the Christmas carnage.

Which soap will you be watching on Christmas Day? Leave us a comment on our Facebook page @EntertainmentDailyFix and let us know what you think!