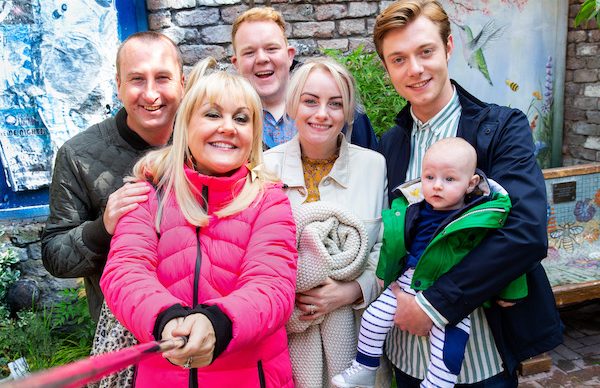 She'll pass away next week

There are set to be heartbreaking Coronation Street scenes ahead as Sinead Osbourne loses her battle with cervical cancer.

And the soap has revealed they will screen two very special epsiodes as she is cruelly taken away from her family and friends after such a short life.

A half hour episode will air on Thursday October 24, and a special one-hour ep will be shown on Friday October 25, both devoted to the final chapter of Sinead’s life.

The episodes will focus on her last day and how she spends it before passing away in her heartbroken husband, Daniel’s arms.

The young mum was first diagnosed with cervical cancer in 2018, but stopped treatment as she didn’t want it to harm her unborn child.

She gave birth to Bertie in January of this year and started aggressive treatment immediately.

Things looked positive in July when a scan revealed the cancer was stable and showed no signs of spreading.

But on her wedding day last month, Sinead discovered a lump in her neck and later received the devastating news the disease had spread to her liver and lymph nodes and she only had months to live.

The prognosis was sadly reduced to weeks when life-prolonging chemotherapy didn’t work.

Now Sinead and Daniel are facing the last days of her life and they are set to be blighted by the fact Daniel ends up kissing Bethany Platt.

Although Sinead will forgive him for his indescretion and he will be with his wife to the end as she slips away.

Rob Mallard who plays Daniel has revealed his sadness that his co-star Katie McGlynn is leaving the show: “Daniel and Sinead have been on and off for two and a half years, so obviously I am very sad to be losing Katie on set.

“We’ve had so many intense scenes and shared so much emotion that we’ve developed a real bond with one another. Daniel and Sinead’s relationship has been so believable and real.

“I find it quite difficult to switch off after emotional scenes, I feel so drained after a scene that’s involved a lot of crying, so I guess the grieving process you see on screen will be a lot easier to play because Daniel’s sad that Sinead’s gone, and I’m devastated that I’m not working with Katie.”

Coronation Street has worked closely with charities Mummy’s Star and Jo’s Cervical Cancer Trust on the storyline and Katie has revealed how much they helped her.

“I spoke with Pete at Mummy’s Star and asked him how it was for him towards the end.

“Daniel’s story is very similar to what happened to Pete and he was very honest with me about his relationship with his wife towards the end of her life.

“He said they argued, they laughed and cried and he’s helped me bit by bit through the whole story. I’ve also had medical advisers on set helping with the stage of physicality she’s up to with her illness. Everyone has been really helpful.”

She continued that her final scenes were tough to film as they felt so “real”.

“When we filmed our last scenes it felt real. I know what a terrific actor Rob is and how he’s going to play the next part of this story without me, and I just feel sorry for Daniel’s character.

“It’s going to be the end of an era because I’ve really enjoyed working with him.”

Will you be watching Sinead’s final scenes? Leave us a comment on our Facebook page @EntertainmentDailyFix and let us know what you think.