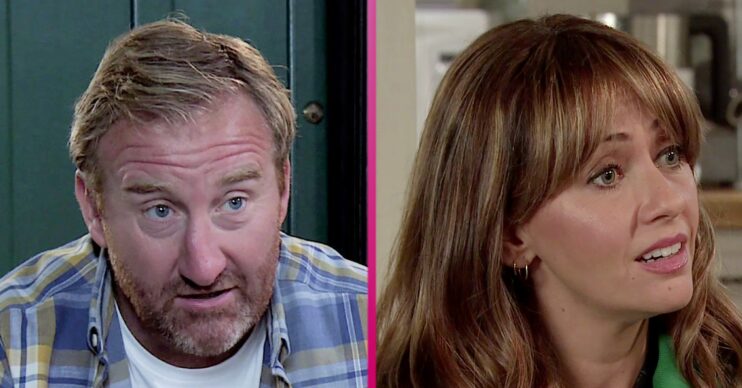 Coronation Street fans are predicting Phill is working for Maria’s competitors and is not to be trusted.

Over the last few months Maria has been desperate to win a place on the local council in order to try and help reduce pollution in the local area.

Recently Fiz‘s boyfriend Phill wanted to help, but fans are predicting he’s actually working against her.

Is Phill really plotting against Maria?

Since Phill’s arrival, fans have come up with numerous theories about Phill and are convinced he’s not to be trusted.

Last week, Phill met with the hairdresser and Kirk and handed her a secret council report after her rival Bernard started using dirty tactics.

But fans don’t trust him and believe he’s secretly been working for Maria’s competitors.

Something dodgy about Phil. Felt it from the start. Mark my words! #Corrie

Phil is definitely up to something!#Corrie

However the report appeared to help and Maria was elected to the council.

Meanwhile it was bad news for Phill as he revealed he is likely to lose his job over the leaked report she used. But is all as it seems?

Was he really trying to help, or could it all be part of a bigger plan?

This week, Phill tells Fiz that he can’t afford the renovations on their new house now he no longer has a job.

Fiz gets more bad news when the estate agent tells her the sinkhole on the street it putting people off and she needs to drop the price of No.9.

When the estate agent reveals that he’s lowered the price of the house on Tyrone’s instruction, Phill and Fiz are taken aback but grateful.

Fiz thanks Ty and tells him that her and Phill will move into the new house sooner to start some of the jobs themselves.

Tyrone is gutted to realise they’ll be leaving so soon.