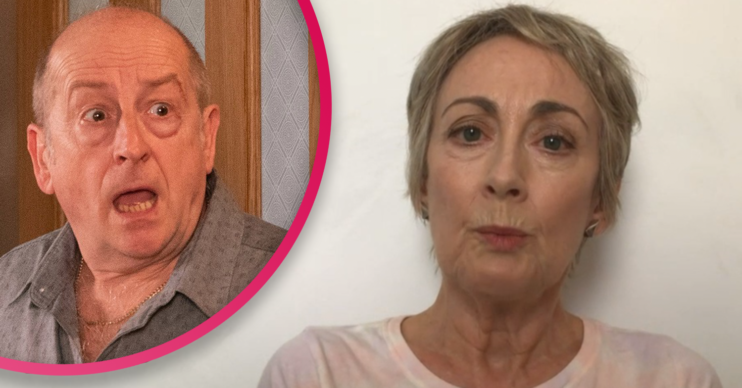 Corrie fans want Geoff to get his comeuppance

Coronation Street star Paula Wilcox has revealed that the Geoff and Yasmeen storyline will soon be coming to an end.

Speaking to Christine Lampard on ITV’s Lorraine, the Elaine actress revealed a huge climax was in store for viewers.

The Corrie star admitted that her character will be part of the spectacular twist sitting on the horizon.

She added: “There’s a huge climax coming and I don’t think anyone will see it coming!”

In last night’s episode, Elaine revealed to Alya that her real name is Phillipa, she used to be married to Geoff and she is Tim’s biological mother.

She fled the family home while he was still very young to escape the abuse she was suffering from Geoff.

“To leave your child behind in a situation like that in sheer terror and wonder for the next 50 years what has happened must be devastating,” added Paula.

Read more: Coronation Street: Who is Elaine? What happened to Geoff’s wife Tess?

“So to start facing up to it now and coming back and meeting these people again has got to be the most brave thing that she has ever done.”

The actress continued: “It’s extraordinary because Elaine was almost thinking you know after almost 50 years of keeping this secret and finally finding out where Geoff lives… that Tim would fling his arms around her.

“But it doesn’t happen that way.”

Paula went on to explain how Elaine found the strength to face Geoff after all these years.

“I think as time’s gone by, Elaine will have found she is able to talk about it,” she said.

“There are more outlets for women to ask for help and so I think what’s given her the strength to try to help Yasmeen because there are ways in which she was helped herself.

“Maybe she will be able to open doors for Yasmeen you know by reading books on coercive control.”

She added: “It’s frightening. I remember years ago reading a poster saying somebody you know is a battered wife – this was years ago.

“But that really struck me that it’s as as prevalent as that.

“Elaine had to get out of that house, that danger, at a time when nobody really knew what we used to call battered wives. It wasn’t something you could talk about at all.”

“It’s an extraordinarily powerful story and I hope it does encourage women to know they’re not alone. It’s a frightening situation to be in with or without children.”