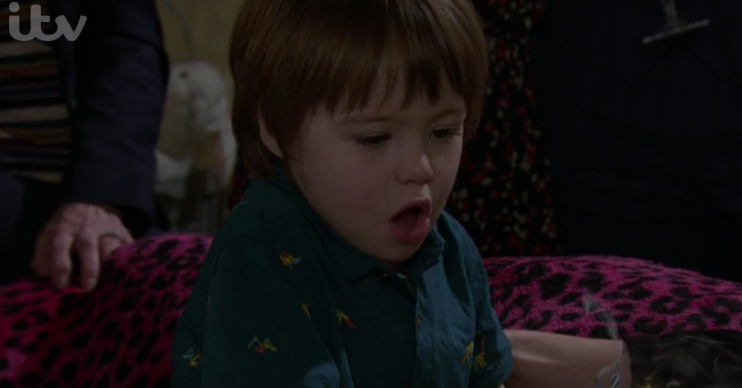 In the hour long visit to the cobbles, Toyah was looking for work after being fired from the medical centre.

As she sat in Roy’s cafe on the phone to her stepsister Leanne, she said: “Look, don’t worry I can always pop round later instead. Hope Oliver feels better,” before hanging up.

Viewers think the soap was hinting that the toddler is seriously ill.

This isn’t the first time viewers have been worried about the little boy.

Last month, Oliver was the centre of attention as his extended family gathered at the Platts’ home to celebrate his third birthday.

However viewers spotted that he was napping a lot and appeared to have a bad cough.

Last year Corrie boss Iain MacLeod revealed that the soap would be tackling a heartrending storyline in 2020, explaining “something will happen that has the most far-reaching impact of any story we’ve done since I’ve been on the show”.

I’m getting really worried about Oliver.

He expanded: “Something horrific occurs that draws in a few different clans on the Street, and forces them to deal with the hardest thing anyone would ever have to deal with.”

Ian also revealed that the storyline would tie into Liz McDonald’s exit after actress Beverley Callard announced last year she would be leaving the soap.

Read More: Coronation Street ‘could be cut to two episodes a week over coronavirus’

Do you think the storyline could be to do with Oliver?