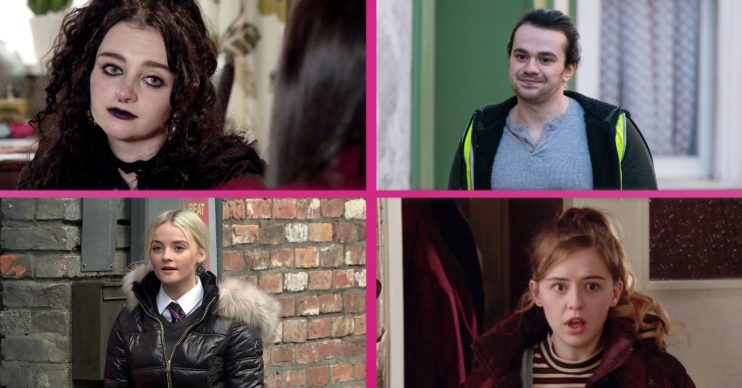 Nina and Seb will grow closer in upcoming scenes

Coronation Street teens, including Nina Lucas and Seb Franklin, could find themselves in danger amid an ‘incredibly sad and tragic’ storyline.

In pictures obtained by the Metro, the ITV soap can be seen filming on the set of the Granada location. But it looks like there could be danger in upcoming scenes.

In the pictures, actresses Millie Gibson and Harriet Bibby, who play Kelly Neelan and Summer Spellman, can be seen on set.

It looks like the characters are attending a party, drinking lager with a gang of thugs.

Could they be in danger?

Coronation Street: Nina and Seb in danger in ‘incredibly sad and tragic’ storyline?

Last year, Coronation Street boss Iain MacLeod teased there would be a ‘tragic’ storyline for the teens this year.

Speaking to Entertainment Daily and other media at the time, he said: “We’ve got a huge story next year, for which we’re laying the ground work this year, which involve some of the younger characters.

“So Asha, Nina, Aadi and Kelly. Some of you may remember Kelly, who is loan shark Rick Neelan’s daughter.

“They’re going to be mixed up in a story which will be incredibly hard-hitting, will have massive ramifications for Roy and Abi.

“And yeah essentially I think it’s going to be one of the biggest things we do next year by some margin.

He added: “It’s quite a serious, social responsibility-type story. It will start with the teens but end up hoovering in Abi and Roy and countless other people as well.

“It would be weird to say I’m excited about it because it’s incredibly sad and tragic I think in some respects. But I think it will be a really important story for us next year.”

With ramifications for Nina’s uncle, Roy, and Seb’s mum, Abi, it’s fair to say that perhaps Nina and Seb are in danger.

In upcoming scenes Nina and Seb grow closer. The two start to bond over their music taste.

Soon Nina invites Seb over for a film. Is it the start of a new romance for the two?

Have you been watching Coronation Street? Leave us a comment on our Facebook page @EntertainmentDailyFix and let us know what you think of these soap spoilers.