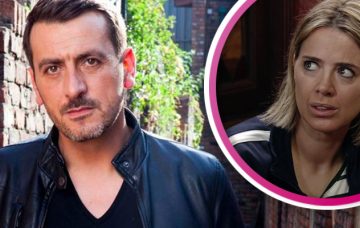 Coronation Street: Peter Barlow to get it on with Abi Franklin?

Coronation Street’s Peter Barlow is to hook up with Abi Franklin.

The cobbles lothario – played by Chris Gascoyne – looks set to get down and dirty with the mechanic (Sally Carman) in the new year, but she is keen for more of a “full-blown relationship” than he wants

A soap source told The Sun newspaper: “Abi seems to want a full-blown relationship but clearly Peter is just up for sex.

“It’ll play out in the new year, before Peter’s other big storyline which see his boat go up in flames.”

Peter’s bedroom scenes with Abi aren’t the only time he will be feeling hot in the new year – he is set to dice with death when his boat goes up in flames, putting his and son Simon Barlow’s (Alex Bain) lives in danger.

A source recently said: “There’s a massive fire on a boat on the canal and Simon is inside.

“Peter and Simon’s lives hang in the balance. It’s going to be a huge stunt. They’re planning massive pyrotechnics and special FX.”

While Peter looks set to survive the terrifying boat blaze, Chris recently admitted he would like to see his recovering alcoholic character drink himself to death when he exits the cobbles.

He said: “If they said to me that they were going to write Peter out or I told them that I was finished for good, he would have to drink himself to death.

“I don’t think it would be a very nice storyline, but it would be brilliant. Something tragic would happen and he falls off the wagon again and drinks himself into oblivion. I would like to do that.”

Do you think Peter and Abi would make a good couple? Leave us a comment on our Facebook page @EntertainmentDailyFix and let us know what you think!