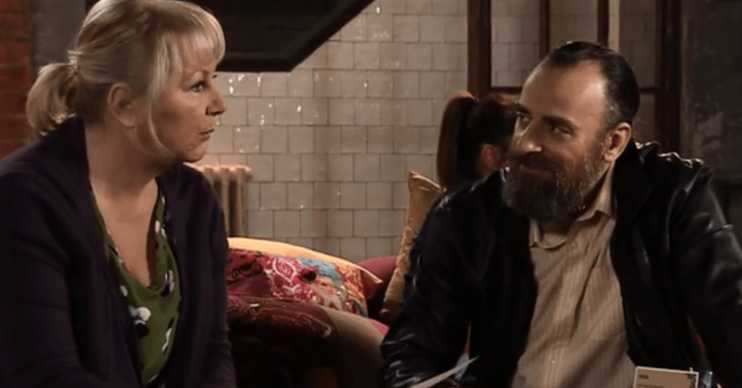 Coronation Street has hinted at a new love triangle in Weatherfield. And it doesn’t look good for unlucky in love Eileen Grimshaw.

In a preview of tonight’s visit to the cobbles (May 3), it appears that the scriptwriters may be building up to a sensational menage a trois.

And Jan Lozinski is slap bang in the centre of it, lucky devil.

Viewers will see Moira Pollock confide in Eileen about her love life.

When Eileen visits the doctor’s surgery to discuss an appointment, Moira admits she “can’t think straight” as she struggles to complete her basic duties as a receptionist.

Attempting to care, Eileen asks her if she’s having problems at work, to which Moira reveals it’s actually her love life which is distracting her…

She tells a shocked Eileen: “I am a woman of passion. I love fast and I love hard. And I’ve just had a glimpse of happiness cruelly snatched away.”

When Eileen asked: “Do I know him?”

Moira replies with the shocking revelation that it’s Jan!

She goes on to say: “Can you believe it, for a minute I thought he was interested in you? But that’s obviously ridiculous.”

With Eileen quietly seething, Moira goes on: “But then I hear Mary talking in the cafe, and she’s prepared to divorce her husband in order to be free.

“And apparently he’s confided his traumatic love life in her, so… She gets to be the one to mend his broken heart.”

However, Eileen is quick to inform Moira that Jan made up the story to let Mary down gently, because he’s not interested in her and he didn’t want to upset her.

Moira then swoons, realising Jan is “good looking AND compassionate” and declaring: “He just needs to find the right woman.”

Corrie viewers know that Eileen IS in fact in a relationship of sorts with polish builder Jan.

They are certainly very attracted to each other and it’s only a matter of time!

However, worried fans don’t trust the newcomer and fear he might be just as dodgy as her serial killer ex Pat Phelan.

Is he involved in human trafficking and slavery? We’ll have to wait and see! If Moira doesn’t eat him alive first, that is…

Do you trust Jan? Leave us a comment on our Facebook page @EntertainmentDailyFix and let us know what you think!