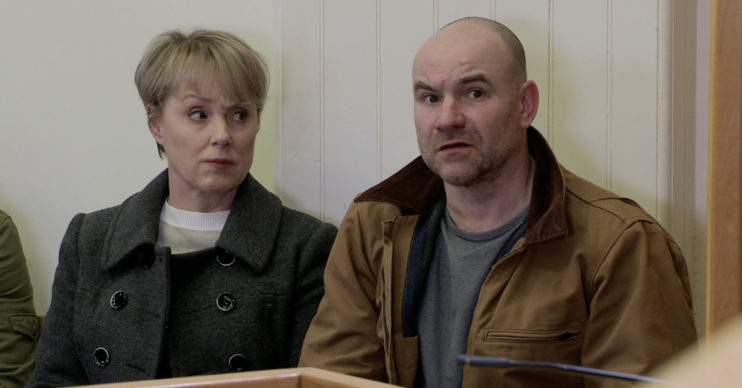 Geoff claims Tim's mum was abusive towards him

A new Coronation Street fan theory has suggested that Tim’s mum will be the one to expose abusive Geoff.

For nearly a year, viewers have seen Geoff gradually take over Yasmeen’s life. He has been taking control and abusing his wife at every opportunity.

A couple of weeks ago, Yasmeen was forced to defend herself when Geoff threatened to kill her. She ended up smashing a wine bottle over his head before stabbing him in the neck.

As Yasmeen was taken in by the police, Geoff was taken to hospital and he survived.

When he came to, he started to tell police that Yasmeen attacked unprovoked. However, questions have been raised about Geoff’s past.

As well as claiming Yasmeen was abusive and had an issue with alcohol, he also said his ex-wife, Tim’s mum, Tessa, was the same way.

In addition to his claims about Tessa, Geoff had a girlfriend before Yasmeen named Jocelyn, who also, according to Geoff, didn’t have a good temper.

Geoff and Jocelyn were arrested for affray at one point but the radio DJ claims his ex-girlfriend was the one who started the fight.

With Geoff making all these claims about abusive exes, a fan thinks that Tessa will make her way to Weatherfield. And she will be the one to prove Yasmeen is innocent.

Writing on Twitter, someone said: “I don’t believe a word Geoff says, but I think that Tim’s mum will be showing up very soon and we will find out if what he is telling Yasmeen is true.”

Someone else added: “I really hope Tim’s mum shows up sometime soon to expose Geoff for what he really is.”

What do we know about Tim’s mum?

Unfortunately not much is known about Tessa besides the fact that she and Geoff got married and had Tim in the early 70s.

Their marriage ended in divorce but it’s clear that Tim thinks his mother was the abusive one in the marriage.

Iain MacLeod recently revealed they will be exploring Geoff’s past on-screen, including what really happened with Tim’s mum. Could this be a hint she’s on her way to Weatherfield?

Will he be able to see that Yasmeen in telling the truth?

Would you like to see Tessa become a part of the show? Leave us a comment on our Facebook page @EntertainmentDailyFix and let us know what you think of this story