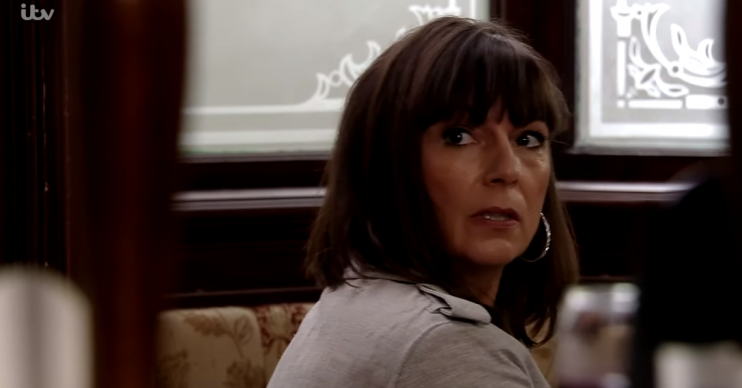 Paula doesn't know what to do after the thugs break in

Coronation Street looks set to introduce even more gangsters onto the cobbles in the near-future.

Fans of the soap have complained there are already too many evil-doers wandering the streets of Weatherfield but after Paula moved in with Sophie and her family there are going to be even more.

Viewers will watch next week as the Webster house is broken into when little Jack is home alone.

The young lad, who had part of his leg amputated last year after contracting sepsis, has been slowly getting back to himself.

But he will be left terrified when he finds a thug in his house rifling through the living room.

Running upstairs he is forced to hide under the stairs and text his dad begging for him to come home and help him.

It later emerges that Paula is responsible having moved in after suffering her own burglary from the same shady group that she has been working against as a solicitor.

Actress Stirling Gallacher who plays Paula said: “Paula is dealing with some nasty folk and she has found herself in a very dangerous situation, just by doing her job.

“She is very scared by what is happening and is out of her depth.

“She is pleased and relieved when Sophie asks her to move in, but secretly wary.

“It is a big step for them and with everything that is going on, it is not really the right time but she doesn’t want to be at home on her own.”

But she insisted Paula didn’t set out to put the family in danger or draw the dangerous criminals to the cobbles.

She added: “I don’t think Paula would have made a conscious choice to endanger Sophie or her family in her own interests, but fear can skew a person’s judgement and Paula is way more scared than she is letting on.

“Does she feel guilty about what happens and how Jack was put in real danger? Yes of course! She’s mortified. To put a small child at risk like that is awful.”

But the burglars aren’t all… with gangster Jan living on the street, it was hinted at that Paula knew him in a professional capacity.

And she was shocked to see him, saying: “Very much so, yes. She knows Jan in a professional capacity and is very compromised by him living in such close proximity.

“Paula is very worried and is extremely uncomfortable and must be very careful what she says, as the situation is beyond delicate.”

Are you happy there’s going to be more crime on the cobbles? Leave us a comment on our Facebook page @EntertainmentDailyFix and let us know what you think!