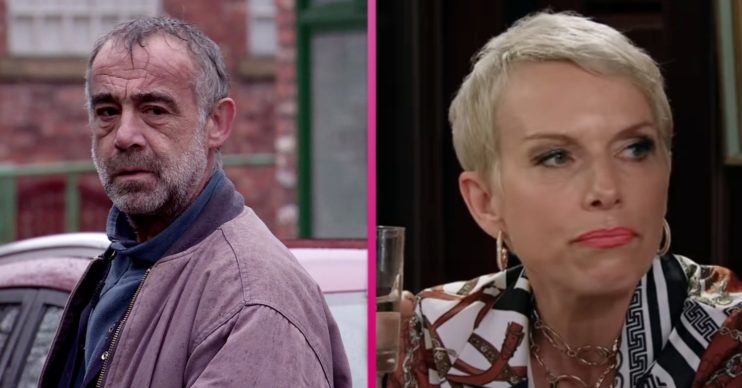 Ray locked Kevin and Debbie in a fridge

In Friday night’s episode of the ITV soap (Friday, February 12) Ray Crosby discovered Debbie’s plan to shop him into the police.

During an altercation with the businessman, Debbie ended up getting locked in the fridge.

But despite Debbie’s brother Kevin coming to help her out, Ray ended up locking them both in the fridge before knocking off the handle and putting a sign on the Bistro door to say it was shut.

In the final scenes of the episode Kevin explained his girlfriend Abi believed he was at camp with Jack so wouldn’t come looking for him.

In the fridge, Debbie moved to sit next to her brother. Spoiler pictures for this week’s episode show that the two have to huddle together for warmth.

However due to the coronavirus pandemic, actors are meant to be social distancing.

But Kevin actor, Michael Le Vell explained how they filmed the scenes safely.

Speaking to TV Times, he said: “They were made an awful lot easier because me and Sue had COVID tests, which thankfully came back negative, so we were able to be close together and managed to give each other a hug.

“That was really nice because when Sue came back to the show last year, I’d not seen her in ages and I just wanted to hug her.”

Read more: Who plays Ray Crosby in Coronation Street? What else has Mark Frost been in?

He added: “Kevin’s all layered up because he was going camping, so with that and the studio lights, it got really warm on set. I was trying to act freezing but I had a trickle of sweat running down my back.”

The scenes continue tonight as Abi is shocked when she learns Kevin never turned up at Jack’s camp.

Will Debbie and Kevin both survive?

Will you be watching Corrie this week? Leave us a comment on our Facebook page @EntertainmentDailyFix and let us know what you think of this story.