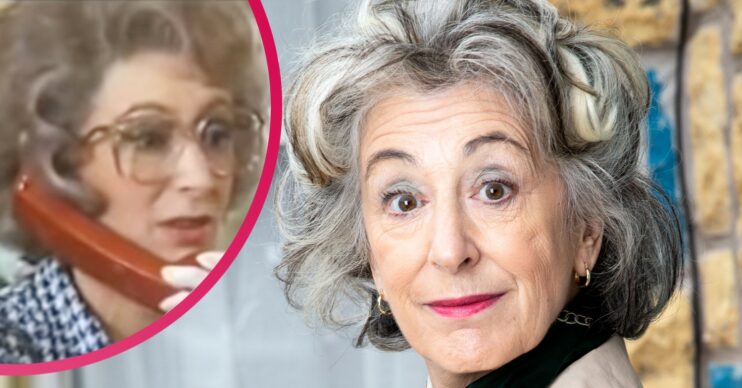 The soap has done it twice this week

Coronation Street has paid tribute twice this week to Maureen Lipman‘s most iconic role in the BT adverts in the 80s and fans have gone wild.

After Evelyn made comments on two separate occasions quoting the actress’s famous ads, fan have all hailed the ITV soap as ‘clever’ and ‘brilliant’.

Evelyn has found herself embroiled in Cathy and Brian’s relationship mess.

On Monday’s episode (June 16) Evelyn and Cathy were in the Rovers when mixologist Jim Fizz arrived to teach a cocktail-making class.

Tom Cruise Jim was not.

“Who might you be?” Evelyn scathed when he turned up in the pub.

When he explained he was a mixologist and Jenny piped up that he “mixes cocktails” Evelyn replied: “He says he’s got an ology,” and gave a knowing look.

Fans of Maureen’s will know the line was from her iconic BT adverts in the 80s, where she played busybody Beattie.

During one ad, Beattie phoned her grandson, Anthony, to find out how his exams went.

“I failed, Grandma,” he tells her before adding he had passed pottery and sociology.

Beattie then goes on to say: “You get an ology, you’re a scientist!”

And during Wednesday’s episode of Corrie, Evelyn said to Cathy: “Everyone’s a scientist,” with another knowing look on her face.

Viewers were in stitches on Monday when the first reference came.

Get in Evelyn, he’s got an ology, love it #Corrie

Brilliant from #MaureenLipman as #Evelyn 👏 ” He says he’s got an ology ” 🤣🤣🤣🤣🤣🤣 #Beattie from @BT #BT is back and in the #Rovers 😂😂😂😂😂😂 #Corrie #CoronationStreet pic.twitter.com/GAJffCgGOW

And last night’s second comment had them even more excited.

They shared laughing emojis and said: “Evelyn’s done it again”!

#corrie Evelyn’s done it again “everyone’s a scientist” Beattie from the BT adverts.

When was Maureen Lipman in the BT adverts?

She starred in the BT adverts from 1987 for several years.

They even lead to the release of a book called You Got An Ology in 1989.