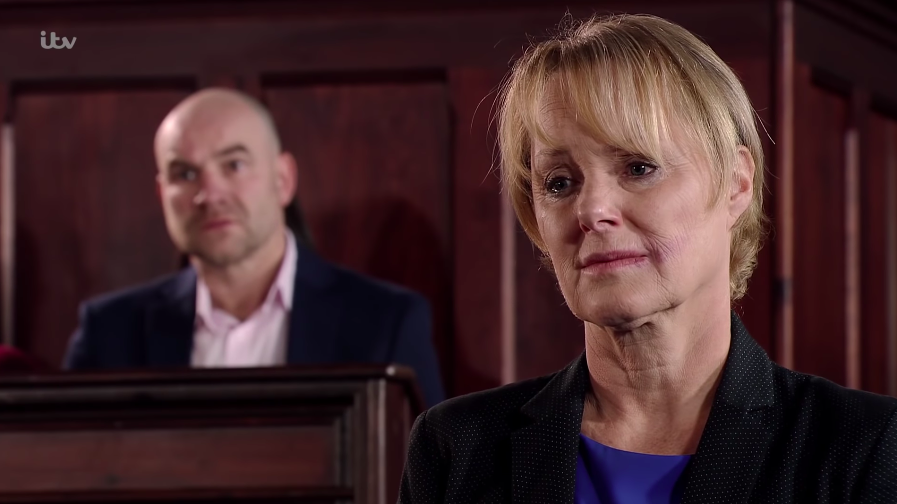 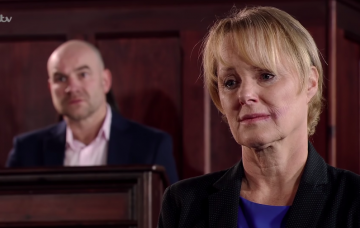 Coronation Street viewers have hit out at a massive blunder in Sally Metcalfe’s fraud trial.

The former Mayor of Weatherfield was jailed for four years earlier this week but fans have spotted a huge mistake that means Sally should have been immediately freed.

They watched outraged as the soap brushed over crucial evidence that could have called a halt to the trial after proving Duncan Radfield was lying.

When Sally proved with CCTV she was in the hospital visiting Jack Webster when conman’s Duncan claimed she was in a hotel with him.

The conman even provided Sally’s credit card receipt with the time and date of the alleged meeting.

Read more: Corrie’s Sally to be saved from jail by unlikely Weatherfield resident?

However viewers were furious when the soap ignored the receipt and instead pretended Duncan was just mistaken about the dates.

One viewer wrote on DS Forums: “I might have missed something but didn’t the CCTV show Sally visiting Jack in hospital on her birthday when she was supposed to be with Duncan in a hotel.

“The lawyer said that if she struggled to remember her dates then so could Duncan get mixed up but I thought they had credit card payments made on Sally’s card for that date and time in the hotel at the time she was in hospital.

“This would show that Duncan was using Sally’s card without her knowing.”

Another added: “The defence would’ve known well in advance of all the evidence against Sally, so should’ve had plenty of time to debunk as many of the “dates” as they could, hence no need for the silly hospital stunt.

“With Social media, surely a schedule of appointments for a Mayor and working at Underworld, that should’ve been easy.

“Again, the crucial point would’ve been the receipt from Sally’s credit card used at a hotel on a day where she was somewhere else that would’ve been a huge red flag to Duncan’s lies.

“The defence should’ve had a field day with that.”

A third furious fan said: “The whole trial all they talked about was the affair.

“The only time they ever mentioned fraud was when they gave the verdict.

“Paula was an awful lawyer how was everything so last minute?”

Did you spot the huge blunder? Let us know what you think by leaving us a comment on our Facebook page @EntertainmentDailyFix!