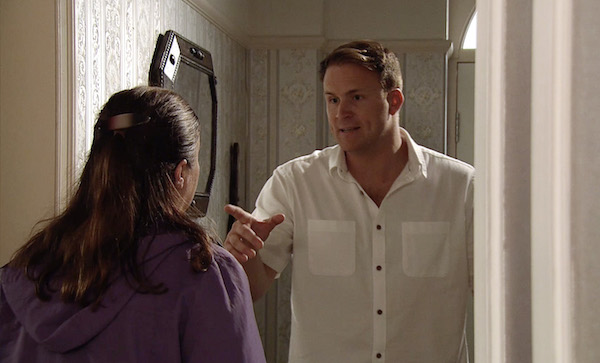 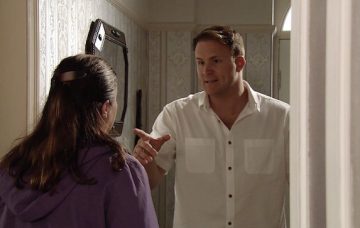 What will Mary do when she discovers Jude has been lying to everyone?

There is trouble brewing between Mary and Jude next week as she discovers he is still lying to his family.

As the week kicks off an excited Jude takes a phone call and then reveals to Mary and wife Angie that he’s got an interview for a place on the paramedic course.

Yasmeen is uneasy about the news, remembering how Jude fainted at the sight of blood on her first aid course.

But Roy is supportive and promises Jude a cheque for £5k to cover the costs of the course.

Mary then answers a call on Jude’s phone and discovers that he walked out of an exam at the university and has been lying to them all again.

What will she do?

A journalist comes to talk to Jude about the Good Samaritan award he’s been nominated for but when Mary discovers that Roy has given Jude a cheque, she tells him to tell Roy and Angie the truth or she will.

How will Jude react?

Later Mary tries to return the cheque to Roy who soon realises that something dodgy is going on.

As Geoff hosts the Good Samaritan awards at Speed Dahl, Mary can’t bear to hear all the good things being said about her son and she slips out of the awards, followed by Roy.

Roy convinces Mary to go back to the awards and she arrives just in time to see Jude collect an award.

Will she be able to keep quiet?

It was revealed last month that Mary would be the victim of Jude’s rage as he violently attacks her in upcoming episodes.

Read more: First look at next week’s Emmerdale in pics

Should Mary expose Jude as a liar? Leave us a comment on our Facebook page @EntertainmentDailyFix and let us know what you think!