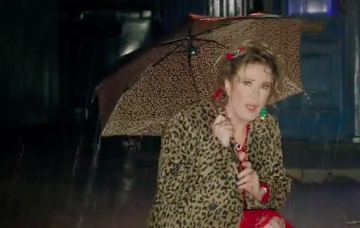 Is it the end of a legend?

Coronation Street’s Liz McDonald has been left for dead on Christmas Day.

Barmaid Liz was mown down by a drunk Jenny Connor in dramatic scenes in tonight’s festive episode.

Fans are convinced Corrie has killed off one of its biggest stars in the shock moment.

Another tweeted: “Is Liz dead?! #Corrie.”

Jenny was left devastated after her secret plot against Liz was uncovered by her husband Johnny.

Viewers had seen Jenny install a secret tracking app on Liz’s phone and monitor where she had been.

She even set Liz up as an escort and arranged for men to visit her at her flat.

And when she stole Liz’s phone to get Mike’s phone number and text him telling him Liz missed him, it all finally came out.

Mike turned up at the Rovers and spilled the beans. A furious Liz confronted Jenny over their Christmas dinner and told Johnny to control her.

But in a huge row it all came out about Jenny, but Gemma’s suspicions about Johnny came out too and he was publicly accused of beating Jenny.

A public row ensued with Rita threatening Johnny, Jenny played dumb to let them think what they wanted and Johnny protested his innocence.

Hitting the bottle, Jenny admitted to everything before storming out vowing to see him in the divorce courts.

She went straight outside and sat in her car sobbing as Johnny secretly went to see Liz to sack her from the Rovers to save his marriage.

But as she drove off she hit Liz before convincing herself she had imagined it when Liz’s body disappeared.

Liz walked back into her flat to change her clothes before collapsing alone on the floor with no-one to save her.

Do you think Liz is dead? Leave us a comment on our Facebook page @EntertainmentDailyFix and let us know what you think!