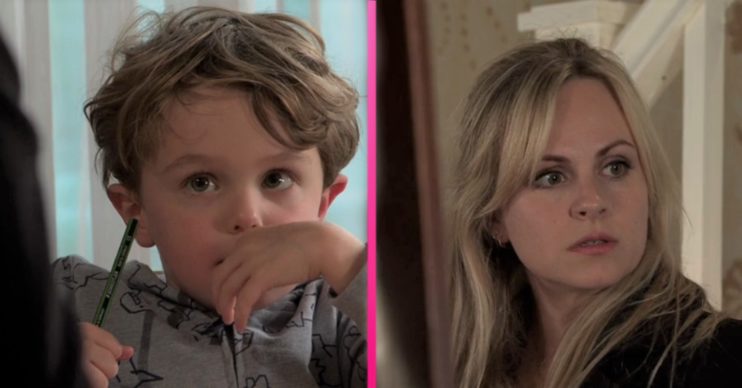 Coronation Street viewers were left in stitches as little Harry revealed he knew Sarah had gone out on the night of Adam’s attack.

Last week, Adam was attacked in the Bistro by an unseen assailant. Over the course of last week, Adam had made quite a few enemies on the cobbles including Sarah and his uncle, Peter.

In last night’s episode (Monday, December 14) Adam was found unconscious by Ray and Debbie, who called an ambulance.

Due to the attack, police began questioning people right away.

At the hospital, Sarah was questioned and she told the detective that she had an argument with Adam over him sleeping with Carla.

She also revealed Carla’s partner, Adam’s uncle, Peter, found out about their night together and wasn’t happy.

Sarah said she would never hurt Adam and after the argument she went straight home.

However viewers know that whilst Adam was at the Bistro, Sarah could be seen coming back into the Platts’ house through the back door.

Coronation Street: Harry told Sarah he heard her go out

Later, back at the house, Sarah told David that she told the police she was home all night.

However Sarah’s four-year-old son Harry was quick to point out that his mum wasn’t home all night.

He turned around and said: “No you weren’t mummy. I heard you go out.”

Furious, Sarah snapped at her son saying: “No, Harry you are wrong! That was not me. And you must not say that again. Do you hear me?”

But viewers found it hilarious that little Harry ‘grassed’ on his own mum.

Harry’s little speech cheered me right up 😂 bless him #corrie

"No you weren't mummy, I heard you go out"😂 little Harry grassing his mum up #Corrie

HAHAHAHA someone give Harry an Oscar for grassing Sarah up 😂😂👏🏼 #Corrie

Adam not only upset Sarah, Carla and Peter, but he also threatened to go to the police and report Gary Windass for Rick Neelan’s murder.

Fans also have a theory that Peter’s son Simon could’ve attacked Adam, as Peter turned to drink when he found out about Adam and Carla.

Meanwhile others believe it could be a case of mistaken identity, and Ray Crosby was the intended tagret.

Who do you think attacked Adam?