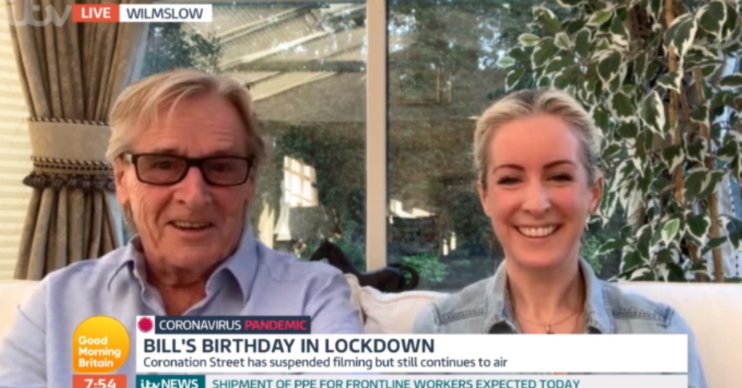 Bill was in the first ever episode of Coronation Street

Currently the ITV soap has suspended filming and reduced weekly episodes due to the ongoing health crisis.

As the soap films six to eight weeks in advance, it means there are enough episodes to see fans through till the early summer.

However, soap fans have worrying about what will happen should the show run out of episodes.

What did Bill have to say about Coronation Street?

The Corrie star, who plays Ken Barlow, spoke on Good Morning Britain with Piers Morgan and Susanna Reid alongside his daughter Verity.

When asked by Piers if he knows what’s happening with the soap and how long the show has left before episodes run out, Bill responded saying: “I gather we had about… I think quite a while because it was going out six times a week, they’re now rationing it to three times a week, and I think we had about two months.

“So I’m not quite sure but I think there maybe about four months.”

Piers then asked what happens if the cast are in a position where they still can’t film when episodes run out.

Bill said: “Well look, we’ve got 60 years to draw on, so I don’t think we’ll be going off air, even when they run out.

“There’s plenty they can be showing and doing. But I think we have got about four months in all, or probably three more. I’m not sure.”

Read More: Are Emmerdale and Coronation street on tonight? Your daily soaps guide including EastEnders

Susanna clarified that she understands there are enough episodes to see fans through till the summer and four specials, looking back at some of Corrie’s most memorable characters, including one about Bill’s alter ego.

When will Coronation Street resume filming?

Although there has been no confirmation about when the soap will start filming again, Andy Whyment, who plays Kirk Sutherland, warned the show will go off air if filming doesn’t start by mid-June.