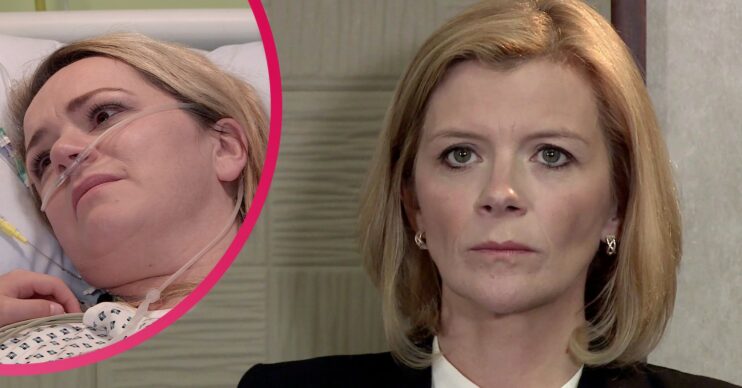 Coronation Street viewers were left appalled by Leanne and Toyah’s conversation about ‘replacing’ Natasha so soon after her death.

Last week, Natasha was shot by drug lord Harvey, who escaped prison. Harvey was after revenge on Leanne for testifying against him in court, but shot Natasha thinking she was Leanne.

Natasha was taken to hospital, however she died during her second operation. As Nick and Sam waited for news, the doctor told Sam that his mother had died.

In last night’s scenes (Wednesday, October 28) Sam wanted to go and see his mum at the funeral directors.

Nick was unsure at first but when Sam said he needed to see her to say goodbye, Nick agreed.

Meanwhile Leanne had a conversation in the café with Toyah.

She told Toyah that she wasn’t sure that he wanted to be Sam’s mother, worrying every time she looks at Sam she’ll wish he was her son Oliver, who died last year.

Leanne said she was scared to get close to him in case anything happened. Toyah reminded her that she didn’t have to make any concrete plans as she didn’t know what Sam wants yet.

However fans were appalled with Leanne and Toyah talking about ‘replacing’ Natasha so soon after her death.

Yeah I hate Leanne, she is not his mum & never will be, you got his mum killed Leanne, get lost…& why tf is Nick not fuming at her, this is ridiculous. #Corrie

Natasha's not even cold in the ground and Leanne's already talking about being his 'mum', can't stannnnnnd her #Corrie #CoronationStreet

What happened to Oliver?

He died in November 2020, leaving his family devastated.

What do you think? Leave us a comment on our Facebook page @EntertainmentDailyFix and let us know what you think.