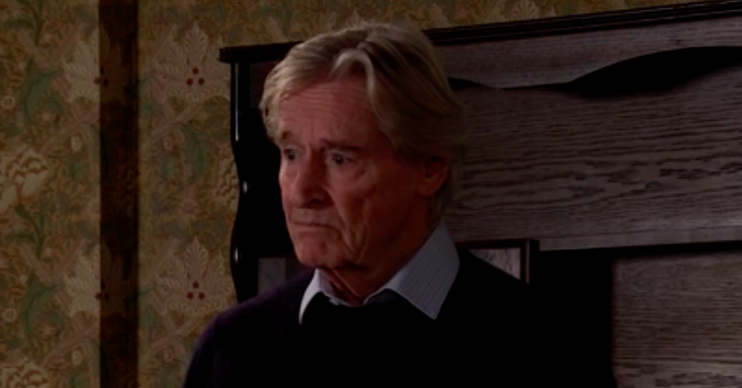 It's the end of an era

Viewers of Coronation Street were left in tears after Ken Barlow said goodbye to the cobbles after 59 years.

The scene saw Ken left alone with his home of all his life after moving his belongings out into his new luxury retirement apartment.

He is moving to Still Waters with girlfriend Claudia Colby – while his daughter Tracy has bought the number one Coronation Street from him.

And his final scenes proved to be emotional as Claudia gave Ken a minute to say goodbye to the old house.

He then picked up some of late wife Deirdre’s pots and left as the camera panned to pictures of Ken, Deirdre and their other family members in an emotional tribute to the house.

Viewers were left sobbing over the heart-wrenching scenes – knowing that Ken doesn’t truly want to leave.

One said: “You know you’re feeling emotional when you cry at Ken Barlow saying goodbye to his house on Corrie. I am actually sobbing at him leaving Number 1 what is wrong with me #Corrie.”

A second said: “Forget the floods, fires, Corona virus…Ken Barlow leaving No.1 Coronation Street is going to upset the balance of The World Face screaming in fear. Thought he’d live there until he was carried out #Corrie #KenBarlow #Legend #PartOfTheCobbles.”

A third said: “Nah. I can’t deal with Ken Barlow not living at No. 1 Coronation Street #Corrie.”

Actor Bill Roache explained to Digital Spy that Ken had to take his final chance of adventure: “This is a big decision for Ken but in some ways he thinks it is now or never.

“He has lived on the same street his whole life and in the same house for most of it. He feels that he had a chance to move away with Martha on the barge but he let her go.

“Part of him regretted that. He doesn’t want to make the same mistake again and Claudia is very persuasive.

“Filming that final scene of the episode was very poignant, just Ken and Eccles and the cobbles.”

But will Ken live to regret moving to Still Waters with Claudia? Leave us a comment on our Facebook page @EntertainmentDailyFix and let us know what you think!