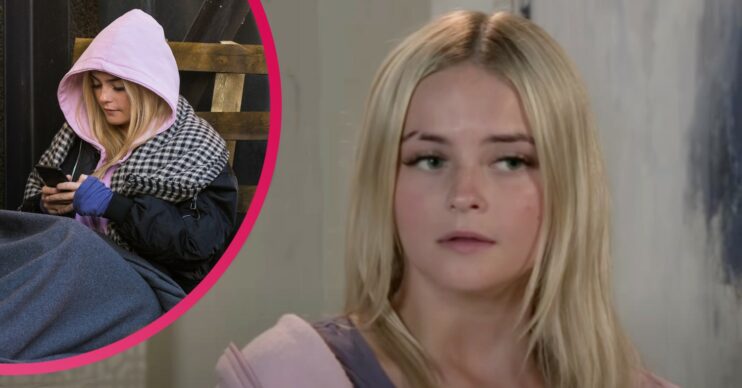 Kelly was recently released from prison

Coronation Street viewers have been left baffled by Kelly Neelan‘s appearance as she slept on the streets in recent episodes.

Recently Kelly was released from prison and planned to go back and live with her foster parents Imran and Toyah.

However as they had taken in another foster child, four-year-old Elsie, it meant they might not be able to have both girls stay with them.

For Elsie’s sake, Kelly agreed to stay in supported living accommodation. However after clashing with another resident Cole, who wanted her to steal phones for him, she started sleeping on the streets.

In Wednesday’s episode (November 17) Kelly woke up after spending a night sleeping in a doorway. She later made her way to a hotel to charge her phone.

But fans were baffled by her appearance, pointing out her make up and lashes looked ‘immaculate’ even though she has been sleeping on the streets.

I need the name of Kelly's mascara. It still looks immaculate even when she is sleeping rough. #Corrie

Extremely sad that Kelly now finds herself homeless. However, it’s remarkable that she manages to have fabulous false eyelashes throughout. #Corrie

For a lass who’s slept rough for two nights, Kelly’s make up is holding up remarkably well #Corrie

Coronation Street: What’s next for Kelly?

In this week’s scenes Stu comes across Kelly scavenging for food and shows her where to get a decent meal for free.

When Stu reveals his part in nailing Corey for Seb’s death, Kelly gives nothing away.

Stu and Kelly make their way to the soup kitchen but when Kelly sees Billy is serving the soup she quickly walks away, but Billy catches a glimpse of her.

Kelly confesses to Stu her part in Seb’s attack but insists she never hurt him.

Later Billy mentions to Imran that he saw Kelly at the soup kitchen and thought he should know.

Worried about Kelly, Imran dupes Kelly’s mum, Laura, into meeting him in the Bistro.

In the Bistro, Laura says she hasn’t seen Kelly in ages. As Kelly beds down in a doorway, a drug dealer offers her some free spice.

However Kelly refuses and he heads off leaving her scared and alone.

The dealer comes back but Jacob sends the dealer packing. Stu appears and recognises Jacob, ordering him to go.

Stu calls in the cafe and begs Nina to give Kelly a break but Nina is unforgiving.

As Stu goes to find the dealer, Kelly staggers off in the other direction.

As Kelly walks, she passes by some drunk school kids who follow her.

The school kids circle Kelly and Nina approaches. Will Nina step in or leave Kelly in a similar situation?