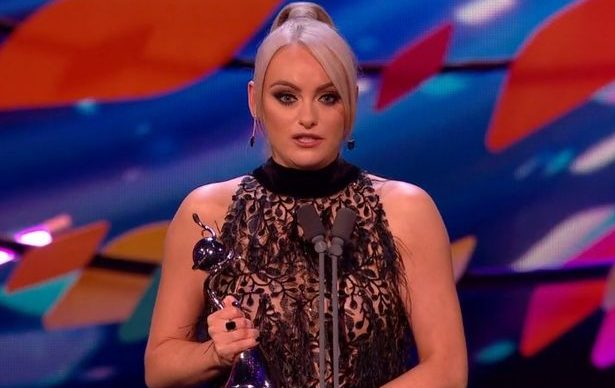 She won the award for Serial Drama Performance

Former Coronation Street star Katie McGlynn has thanked her fans and supporters, after her amazing achievement at the National Television Awards.

On Tuesday night (January 28), the 26-year-old was overwhelmed when she won the award for Best Serial Drama Performance for her portrayal of cancer sufferer Sinead Tinker.

On stage, the actress gave an emotional acceptance speech, telling those present she was “shocked to even be nominated for the award”.

Thank you from the bottom of my heart!

She thanked the cast and crew of the ITV soap, paid tribute to her beloved granddad and dedicated the award to cervical cancer patients and survivors.

The next day, Katie returned to social media to send another gushing message to the fans who had voted for her.

Alongside a photo of herself on the red carpet of the swish event at the O2 Arena London, she wrote on her official Instagram account: “Thank you from the bottom of my heart to everyone who voted for me! Last night was a night I’ll never forget. #NTAs #feelingthelove.”

Understandably, many of her 293,000 followers returned the love, with Emmerdale star Anthony Quinlan responding: “Yes babe, so well deserved.”

Another said: “You looked absolutely stunning, you truly deserved the NTA award.”

A third added: “Well done on winning. I voted for you because the cancer storyline you portrayed in Coronation Street was absolutely incredible.”

Katie gave a heartbreaking performance as Sinead on the ITV soap, who was diagnosed with cancer while pregnant with her first child Bertie.

After joining the soap in 2013, Katie’s character Sinead met and fell and love with Daniel Osbourne until tragedy struck the pair last year when she was given just months to live.

In October, Sinead died peacefully in her sleep as husband Daniel read their son Bertie a bedtime story.

Viewers were heartbroken, and many called for both Katie and actor Rob Mallard to win awards for their performances.

Since leaving the Weatherfield soap, the actress has deservedly enjoyed some time off, including a holiday in Mexico, and took part in pantomime, but was sadly forced to pull out due to sickness.

Are you glad Katie McGlynn won the award for Best Serial Performance? Leave us a comment on our Facebook page @EntertainmentDailyFix and let us know what you think!