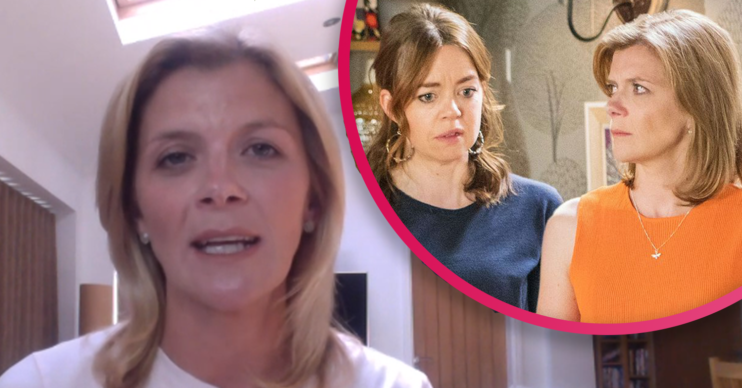 She headed back into the ITV studios with her co-star and real life best friend Georgia Taylor, who plays her on-screen sister Toyah Battersby.

During an appearance on Good Morning Britain, Jane, who plays Leanne Battersby, described her return to Corrie as “eerie”.

“We were the first people back though the doors,” she said.

“It felt quite eerie because there was literally nobody else there.

“But it was also quite comforting to know I was going back through those doors with my best friend.

“There was a sense of normality but it was kind of a new normal if you like.”

ITV bosses have introduced some big changes on set to ensure the cast and crew’s safety as they return to work.

There are now individual managers overseeing each team that carry around a two-metre pole to enforce social distancing.

“Actually it does remind you what two metres is.

“I’m guilty of this myself, I think that I’m two metres away from someone but when you see the pole you realise that actually two metres is quite some distance.”

During lockdown, Jane revealed that her husband Robert Beck has been doing her hair.

In fact, he even coloured her locks ahead of her return to Corrie.

“He’s done my roots twice,” she admitted. “He’s quite good with the hair colour.

“[Robert] also cut the boys’ hair twice. He did them yesterday actually.

“He didn’t just do a buzz cut. he did a proper grade with a nice finish. He’s developed a new skill.”

Coronation Street is on ITV on Wednesdays and Fridays at 7.30pm.