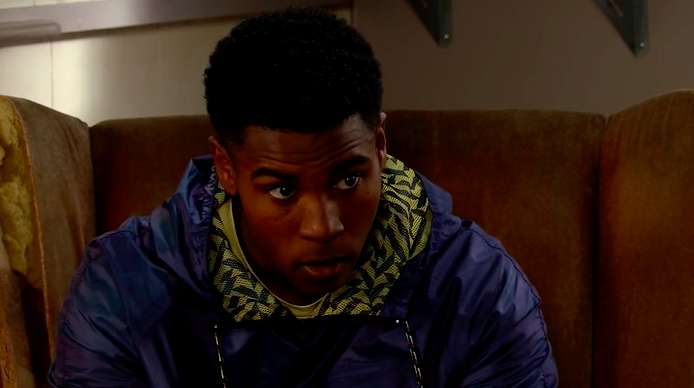 It's an awkward moment all around

James Bailey of Coronation Street is in for a shock next week when his ex turns up on the cobbles – and is friends with his dad.

Footballer James has been hiding he is gay over fears about coming out as a professional footballer and becoming a target for homophobic abuse.

And while his mum Aggie and brother Michael know the truth about his sexual orientation, his dad Ed still remains in the dark.

There have been hints over the last few months that builder Ed isn’t accepting of gay people and now that is set to be explored.

Actor Nathan Graham told the Daily Star: “A guy called Danny arrives in Weatherfield and starts working as a temporary manager in the Bistro. He previously worked with James’s dad Ed, so the family all know him well.”

James and Danny have a little bit of history, so seeing him in his new home puts James into a spin.

And it will turn out that James knew him best of all – but didn’t know he was one of his dad’s friends.

Nathan added: “Danny was married but he’s since come out as gay to his family and friends, and when he comes to Weatherfield he tells Ed he’s now out, too. James and Danny have a little bit of history, so seeing him in his new home puts James into a spin.”

James is going to be left terrified that he could be outed to his dad by Danny.

But could there be sparks between a newly out Danny and James once again – or could Ed put paid to any potential romance?

Nathan revealed: “James doesn’t want his dad to find out in a way that doesn’t directly come from him. So it’s hard for him to decide his next move. Does he try to keep Danny quiet or does he come out to his dad?”

Viewers will see this week how James copes with having his ex on the cobbles when Danny lands a new job at the Bistro.

Could it spur him on into coming out to his dad?

Or will the fear of being an out gay man in the world of professional football be too much for him to cope with?

Corrie fans will have to tune in to find out.

How do you think Ed will react to James’ coming out? Leave us a comment on our Facebook page @EntertainmentDailyFix and let us know what you think!