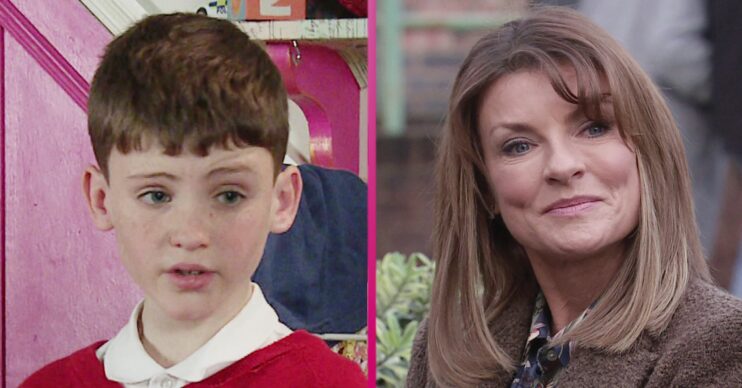 Coronation Street: Is Joseph leaving for good? Will he go to Portugal with Linda?

Linda offered for Joseph to come and live with her

Coronation Street character Joseph Brown told his dad he wants to go and live with his grandmother Linda in Portugal tonight (Monday, February 21) but is he leaving for good?

In tonight’s episodes, Linda suggested to Chesney that Joseph goes to live with her in Portugal, saying he would get her undivided attention, as it’s clear he wasn’t happy living in Weatherfield.

Linda asked Joseph if he wanted to live with her but before he could answer, Joseph took Linda to the cafe to talk about his son.

He warned her to keep away from his family. But after Joseph overheard Chesney and Gemma speaking about what would be best and thought they didn’t want him living with them anymore.

He later told Joseph he wants to live with Linda. But is going to go?

While it hasn’t been confirmed if Joseph is leaving Weatherfield, William Flanagan, who plays Joseph, Sam Aston, who plays Chesney and Jacqueline Leonard, who plays Linda, were pictured filming scenes in an airport.

In pictures obtained by Daily Star, Chesney was pictured in tears on his knees at the airport, while Joseph and Linda stood nearby with suitcases.

An insider told the publication: “These snaps suggest all is not well. It looks like Joseph could be heading off and leaving dad Chesney behind. Fans might want to stock up on tissues.”

Coronation Street: What has been happening with Joseph?

Joseph went to live in Portugal with his mum Katy in 2015. He returned in 2017 when Katy was killed in an off-screen car crash.

He came back to Weatherfield to live with his dad Chesney. Since then, Chesney and fiancée Gemma have gone on to have quadruplets Aled, Bryn, Carys and Llio.

Recently Joseph ran away from home after it came out he was being bullied at school and Chesney went to his teachers, despite Joseph asking him not to.

He later planned to return home after hiding in cousin Hope’s attic, but he and Hope ran into Bernie’s friend Clint.

Clint returned Joseph home, pretending to find him, taking the reward money that had been donated by family, friends and members of the community.

When Bernie found out what Clint did, he offered her half the money in return for her silence. Knowing how much her family needed they money, she went along with Clint’s plan, but soon the truth came out,

Recently Linda returned to Weatherfield wanting to spend time with Joseph and her other grandson Jake. But will she be leaving with Joseph?