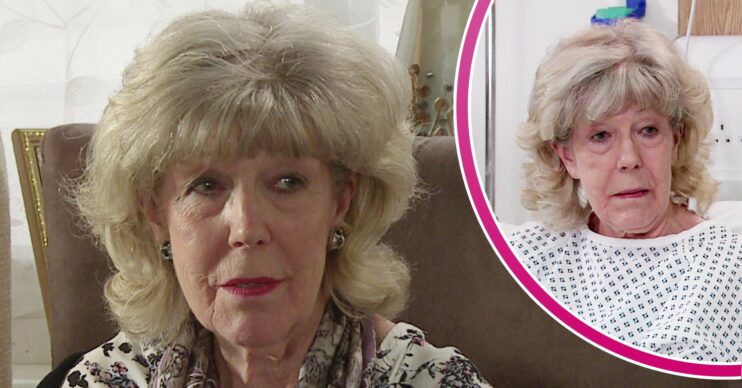 Coronation Street: Is Audrey going to die? What’s really wrong with her after suicide attempt?

Is Audrey going to be okay?

Audrey’s family gathered to celebrate her birthday, but it was clear Audrey wasn’t her usual self.

Later Audrey’s daughter Gail called to check on her and it was revealed to viewers that Audrey was in hospital.

It seems Audrey had taken a lot of sleeping pills, leaving the doctor concerned. But will she be okay?

Over the last year, Gail has become concerned about Audrey’s drinking.

Recently Audrey had an accident in the barber’s whilst drunk.

The motorbike in the barber’s fell on top of her and she wasn’t found until the next day, by her son Stephen.

Over the last few weeks her family have been arguing over her money.

She was furious when they started rowing at a meal and grandson David drove Stephen out of Weatherfield.

In tonight’s episode, Audrey finally agreed to come for a meal in the Bistro for her birthday.

However, Gail noticed she was very quiet and didn’t seem herself.

David revealed he had reached out to Stephen.

Later David, Sarah, Shona, Nick and Gail took her to show her their birthday surprise.

They revealed that they had signed a rental agreement with Debbie and Audrey’s old salon is now hers again.

Audrey seemed to put on a smile for her family, but it was clear something was wrong.

Later, Gail tried to pop over to her mother’s and was worried when she wasn’t there.

She gave her a call, but when Audrey picked up she told her she was at home and just tired.

However, she was actually in hospital.

Soon a doctor came along and told her a psychiatric liaison officer would be coming to discuss things with her.

Audrey insisted she took a few too many sleeping pills by mistake when she had been drinking.

But the doctor said that the toxicology report didn’t suggest an accident and that the number of sleeping pills she took indicated it was deliberate.

Did she try to take her own life?

And why would she do that? Is she depressed? Is something else going on? What’s really wrong with Audrey in Coronation Street?

Spoilers: What’s next for Audrey?

In next week’s scenes the psychiatry liaison officer, Becky, visits Audrey and gently quizzes her about why she took so many sleeping pills.

As Audrey leaves the hospital, she’s thrilled to get a call from Stephen telling her he’s coming back.

Meanwhile in the Rovers Ed lets slip that he saw Audrey at the hospital, leaving Sarah concerned about her gran.

Later in the Bistro, Audrey apologises to Nick for messing everyone around but reveals she doesn’t want to reopen the salon.

What will Nick do?