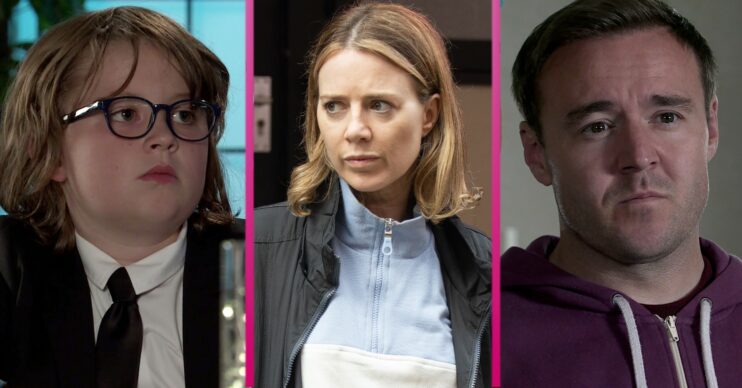 There's been no shortage of action on the cobbles this year

Coronation Street in 2021 has been a dark place to be! There has been death, drama, grief and betrayal.

Here’s our round-up of the best stories in Corrie this year. And the ones we didn’t enjoy so much, too.

There was a lot of good stuff in this year’s Coronation Street.

Of course the biggest story of 2021 in Weatherfield was Seb Franklin’s tragic death at the hands of Corey Brent, Kelly Neelan and their friends.

Seb and girlfriend Nina Lucas were simply walking home when they came across Corey and his mates. They began tormenting Nina because of the way she dressed, harassing and abusing her.

When she and Seb walked away, the gang followed. They brutally attacked Nina and Seb, pushing them to the ground and punching and kicking them.

Nina survived the vicious beating, but Seb tragically died from his injuries, devastating Nina, and his mum, Abi.

The aftermath of Seb’s death has been one of the most talked-about Corrie storylines of recent years. Mollie Gallagher, who plays Nina, and Sally Carman, who plays Abi, have been praised for their acting skills.

In the way of all the best soap stories, the effects of Seb’s attack are still being felt in the Street and we reckon the awful events will carry on affecting the residents well into 2022.

As Leanne Battersby was reeling from the death of her young son, Oliver, her adopted son Simon Barlow was tackling a tricky situation of his own. He got mixed up with new friend Jacob who manipulated him into getting into debt.

With Simon owing Jacob, he was quickly drawn into the murky world of Harvey Gaskell and his drug dealing.

When Leanne found out the truth, in true Battersby style she jumped in with both feet and went to the police.

But her determination to get Si out of the dangerous world he’d got into meant the whole family had to go into hiding ahead of Harvey’s trial.

She claimed she wanted to make amends with her former foster mum, Rita Sullivan, but she was working for her nephew – Harvey! Thankfully, Sharon saw sense and Harvey went to jail.

But as super soap week got underway, the horror of Harvey’s vendetta against Leanne came back with a vengeance…

Determined to take revenge on Leanne, Harvey escaped from his prison van – whacking Kevin Webster over the head while he was at it, and smashing into the Alahans’ car – and made for Weatherfield.

After some aggro between Abi and Corey – more about that later – Harvey got his mitts on a gun and set off to Leanne’s flat.

Meanwhile, Natasha Blakeman was late to the Coronation Street Halloween festivities and had also gone to the flat, where Harvey mistakenly shot and killed her.

Son Sam was devastated by his mum’s death and hasn’t spoken since he said goodbye to her at the funeral parlour. It’s been a heart-breaking watch but it’s got us gripped.

Back to super-soap week where Abi was falling apart in the wake of son Seb’s brutal murder and Corey Brent being let off.

Abi couldn’t cope with Corey being treated as a hero and moving on with his life and career and she planned to finish it. She got a gun from Seb’s dad, Tez, and plotted to use it on Corey.

But the collapse of the storm drain messed with her plan.

She and Corey ended up trapped under the cobbles. And Roy Cropper arrived in the nick of time to stop Abi doing something she would regret forever.

The pair escaped and Corey was eventually brought to justice in the right way.

But Roy is still struggling with his decision to lie to the police for Abi. He’s left Coronation Street and we’re not sure he’ll ever be back. Sob!

When Todd came back to Weatherfield we thought he might have changed his ways.

But nope. He was as manipulative, scheming and crafty as he ever was. He managed to break up ex-boyfriend Billy and his new fella Paul, with the help of young accomplice Will and he and Billy reunited.

But in 2021, as Billy and Todd’s wedding approached, finally viewers got the outcome they were hoping for!

Will turned against Todd and sent a video of him confessing to Paul.

And Paul promptly played it to the whole street at the launch of the saucy calendar created by Emma.

Todd’s crimes were exposed. Hooray! He’s bounced back, though, which is also great because every soap needs a villain and we love to hate Mr Grimshaw!

Corrie has been praised for its brilliant storylines this year, but there have also been some plots that just didn’t do it for us. Here’s what we think were the low points:

Following in the footsteps of Steve and Becky McDonald, Jack and Vera Duckworth, Roy and Hayley Cropper and countless other Corrie characters, Aggie and Eddie have now bought baby Glory from her mum.

We’re just hoping this will be the last buying-a-baby plot in soap. We’re totally over it.

What purpose has Zeedan’s return to Weatherfield served other than to heap more misery on to the head of poor Yasmeen who is still recovering from her awful abuse at the hands of former husband Geoff Metcalfe?

Don’t let the door hit you on the way out, will you, Zee?

And we’ll be even less happy if he and Fiz end up getting back together after the way he treated her.

Mind you, we’re still convinced Alina‘s pregnant with Tyrone’s baby so if she came back to the street with a tot in her arms, we might get interested again…

Remember how Peter Barlow was at death’s door at the start of 2021? And then he got a liver transplant and now he’s totally fine. Top notch.

In fact, maybe his transplant won’t ever be mentioned again, just like how no one mentioned Carla’s kidney transplant even when her husband was going through a very similar thing.