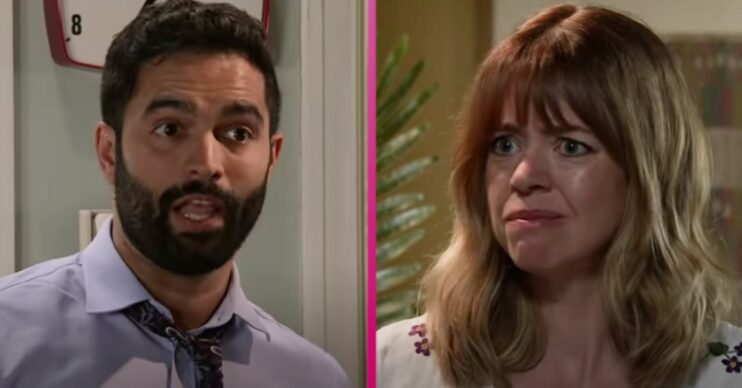 Coronation Street: Imran and Toyah will split as the trial drives them apart, fans fear

Toyah and Imran have been together for years

Coronation Street fans fear Toyah and Imran will split up as the trial will drive them apart.

Earlier this year, Kelly was arrested and charged for the attack on Nina and murder of Seb Franklin.

Imran is representing his foster daughter in the trial and has been working all hours by himself.

Earlier this week, Imran discovered his ex-wife Sabeen is a barrister on Corey Brent’s defence team.

In last night’s episode (Wednesday, August 25) Imran was debating what to do with the large sum of money he had been anonymously given to pay for Kelly’s legal experts.

As Sabeen arrived, she asked Imran if they could ask the courts to take in account Kelly and Corey’s ages during the trial.

Later on, Imran found out Corey’s identity was leaked online by Jack Webster, which could affect the trial.

After an encounter with Abi, it became clear Imran was trying to delay the trial as much as possible.

Toyah reminded Imran that he had done an incredible job, but the pressure began to get to him.

Soon Toyah pointed out Imran has crossed a line but he said if he let up for a minute then Sabeen will win.

She was left shocked that Imran was focused on beating Sabeen, but Imran told her he was determined to win no matter what it takes.

However Toyah turned round and asked: “Even if you lose me?”

This has left fans fearing that the couple could end up splitting up.

It's looking like Toyah and Imran is the next doomed relationship on that street? 🙄 #Corrie

Is this going to split Toyah and Imran up? #Corrie