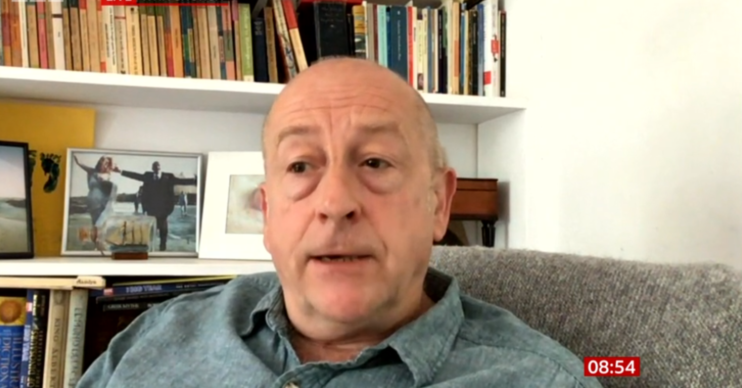 The storyline has been going on for nearly a year

Coronation Street star Ian Bartholomew has been given counselling over the Geoff and Yasmeen coercive control storyline.

Geoff has been abusing his wife Yasmeen, but things took a turn when Yasmeen was forced to defend herself.

As Geoff threatened to kill her, Yasmeen hit him over the head with a wine bottle. She then stabbed him in the neck with the glass.

Currently Geoff is in hospital, meanwhile Yasmeen is in prison awaiting her trial for attempted murder.

On today’s BBC Breakfast (Wednesday, May 13), Geoff and Yasmeen actors Ian Bartholomew and Shelley King did a video interview with hosts Louise Minchin and Dan Walker.

During the chat, Ian admitted he had received counselling because of the storyline.

After being asked by Louise how playing Geoff has affected him, Ian said: “It’s not been easy, you have to go to places that are unpleasant, it’s dark.

“But I have had some help, the company have helped me with some counselling so I can offload any angst or anger or shame that I might have.

“But as I said it’s been a very, very important storyline and the responsibility has kept us going.

“As Shelley said we’ve relished the opportunity to be able to tell a story that really needs to be told. Especially in a time like this in lockdown where it’s happening, it would seem a lot more than before.”

How bad did Geoff’s abuse get in Coronation Street?

Geoff began to control every aspect of Yasmeen’s life and isolated her from friends and family.

Not only did he control what she did, he told her when she could go out, what she had to be doing at certain times and took control over her money.

He also set up a secret camera in order to spy on his wife.

His abuse even went as far as destroying her belongings. A couple of months ago, he killed her beloved pet chicken Charlotte Bronte and fed it to her, leaving viewers horrified.

Most recently, he burnt her clothes when he discovered she had been hiding a holdall of her stuff under the stairs, ready to escape.

But after Yasmeen was denied bail over the attack on her other half, will she be able to prove Geoff was the abusive one in court?

Have you been watching Geoff and Yasmeen’s storyline? Leave us a comment on our Facebook page @EntertainmentDailyFix and let us know what you think of this story