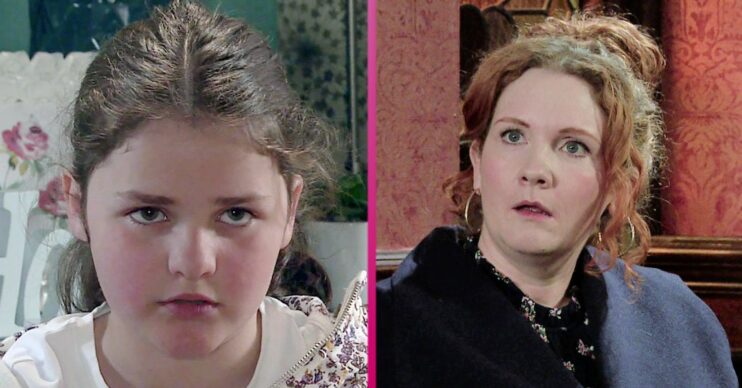 Coronation Street: Hope to kill Fiz after row with Phill?

Are Fiz and Phill in danger?

Coronation Street cast members have been spotted filming new scenes and it looks like Hope could be about to cause an accident with a digger.

In pictures obtained by Metro.co.uk, Hope, played by Isabella Flanagan, can be seen going to great lengths to ruin Fiz and Phill’s house plans by stealing a digger and going on a wrecking spree.

Coronation Street: Hope to kill Fiz after row with Phill?

According to the publication, Hope has an argument with her mum’s boyfriend and soon sees red.

She threatens Phill and jumps inside the digger that the couple are using to renovate their new home.

However chaos ensues as she manages to get it working.

She ends up smashing the windscreen of Phill’s car, but how will Fiz react?

Could Fiz and Phill be in serious danger from the machinery?

Fiz and Phill move into their new home

Fiz and Phill began dating after Tyrone left her to be with Alina Pop.

Although Tyrone and Alina’s relationship didn’t last, Fiz and Phill’s relationship appears to only be getting stronger as the couple recently decided to buy a house together.

Although Phill lost his job and Fiz and Tyrone were struggling to sell No.9, Tyrone agreed to lower the asking price of the house so Phill and Fiz could move into their new home.

This week Fiz packs up the van but admits to Tyrone she’s worried she’s making a big mistake.

However Tyrone wants what’s best for her and tells her she deserves a fresh start. But as he waves her off it’s clear he’s upset she’s leaving.

Later this week, Beth and Sean gently rib Fiz about about her new house and how she’s finally landed on her feet. Fiz does her best to appear enthusiastic.

Later she calls into the garage to see Tyrone and he admits how much he misses her and the girls.

Is Fiz missing him too?