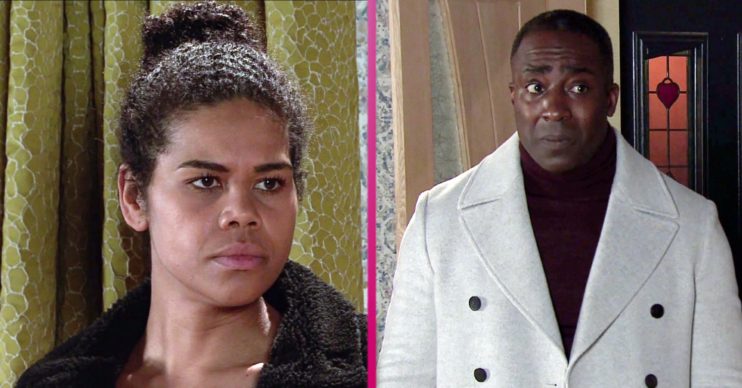 Coronation Street has been hit with 104 Ofcom complaints over Grace’s racial profile storyline.

But as Grace left the store, the security guard demanded to see her receipt.

Unable to find the proof she paid for her shopping, the security guard locked her in the office. As she panicked about being locked in the room, she realised she was having a contraction.

She used the office phone to call Michael’s uncle Ronnie who rushed over and took her to the hospital.

Later at the hospital, the security guard paid Grace a visit.

As she showed him the receipt, Ronnie angrily confronted the security guard accusing him of ‘racially profiling and illegally detaining a pregnant woman of colour.’

Later, Michael arrived to be by Grace’s side during their baby’s birth saying: “It’s meant to be the moment of my life and now it’s tarred forever by some racist.”

In the Ofcom weekly report for Tuesday March 16 to Monday March 22, it was revealed 104 comments were made about Coronation Street.

In a statement Ofcom made to Entertainment Daily, they said: “We are assessing the complaints against our broadcasting rules, but are yet to decide whether or not to investigate.”

What’s next for Michael and Grace?

Soon afterwards, Grace gave birth to a baby girl who she and Michael named Glory.

Michael later revealed their daughter had to be put on a ventilator as she was struggling to breathe.

In tomorrow night’s episode (Friday, March 26) Michael reveals Glory is suffering from anaemia. Later, Ronnie tells Ed he’s a carrier of sickle cell disease and that could be the root of the problem.

But Ed is angry at Ronnie for assuming he’s Michael’s biological father. After speaking to Aggie, he informs him that his condition wouldn’t have any link to Glory’s anaemia.

But Ronnie suspects them of closing ranks to hide the truth.