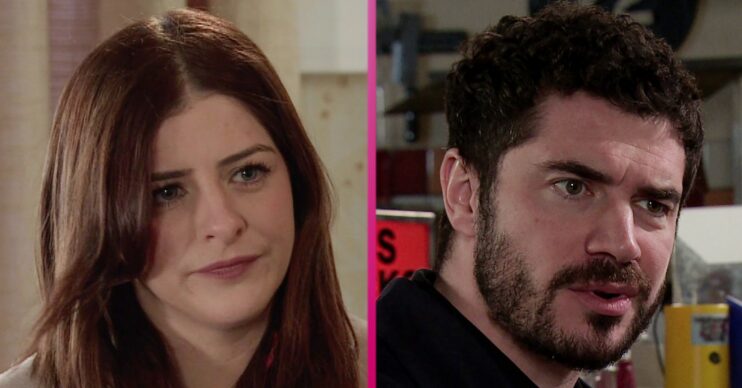 Coronation Street: Has Lydia left for good? Is this the end of the storyline?

Lydia pushed Adam off a balcony

Coronation Street character Lydia Chambers appears to be done with Adam Barlow after spending months trying to ruin his life.

Lydia set out to ruin Adam and Sarah’s marriage as revenge for how he treated her when they dated many years before.

But now it seems like she’s finished with Adam, is she leaving for good?

Coronation Street: What has Lydia done to Adam?

When Lydia met Adam it became clear she knew him. She told Sarah they dated at university for six months, but Adam didn’t remember the relationship that well.

It became clear someone was out to get him.

Viewers saw Lydia was behind it all and it wasn’t long before she took things a step further.

She got another phone and began sending text messages to herself.

She then made sure she was at the same hotel as Adam on Valentine’s Day and charged stuff to his room.

Lydia later told Sarah that she and Adam had been having an affair.

After planting the other phone in Sarah and Adam’s flat, Sarah was convinced Lydia was telling the truth, but viewers know she was lying.

Coronation Street: Why did Lydia want revenge on Adam?

They met at the shopping centre and it was revealed what Adam did to Lydia to make her so upset.

Lydia told Adam she really loved him but he cheated on her at least three times during their relationship.

Lydia explained she was pregnant but got the abortion and ended up dropping out of university.

When she saw him with Sarah she hoped they could all be mates, but the fact Adam didn’t remember Lydia hurt her.

Adam apologised for how he treated Lydia, but when he asked her to tell Sarah the truth she was enraged and pushed him.

Adam ended up falling backwards and over a balcony.

His uncle Daniel witnessed Adam falling and called an ambulance.

Adam and Lydia call a truce

In tonight’s episode (Wednesday, March 23) Sarah found out about the accident but didn’t want to see him.

However Carla encouraged her to visit Adam, stating she didn’t trust Lydia.

Meanwhile in hospital, the doctors told Ken and Daniel that Adam would need an operation as he had a bleed behind his eye, but there was no permanent brain damage.

Lydia soon came to visit Adam in the hospital and was upset by what happened.

She explained she didn’t mean for him to fall. Adam said he knew she pushed him, but he understood why Lydia was so hurt.

The solicitor apologised, told Lydia she didn’t need to tell Sarah the truth and he wasn’t going to go to the police about her pushing him as he’d caused her enough pain.

Sarah soon arrived and in the hospital waiting room, Lydia came clean and admitted she lied about the affair and why she did it.

But Sarah called the police on her.

Afterwards, Sarah apologised to Adam for not believing him and said she called the police on Lydia.

Adam didn’t want to cause Lydia anymore hurt and went to the station, lying that he fell and Lydia didn’t push him.

Soon Lydia was released and thanked Adam for helping her.

She wished him luck before leaving the police station, but has she gone for good?

Has Lydia left for good?

This is the last viewers will see of Lydia.

It was revealed that actress Rebecca Ryan, who plays Lydia, was only contracted to be on the show for this storyline and would leave at the end of her contract.

Although it’s worth noting Lydia has not been killed off and could return in the future.

But for now it looks like this is the last time we will see her.

What do you think of Lydia leaving Coronation Street? Leave us a comment on our Facebook page @EntertainmentDailyFix and let us know what you think.