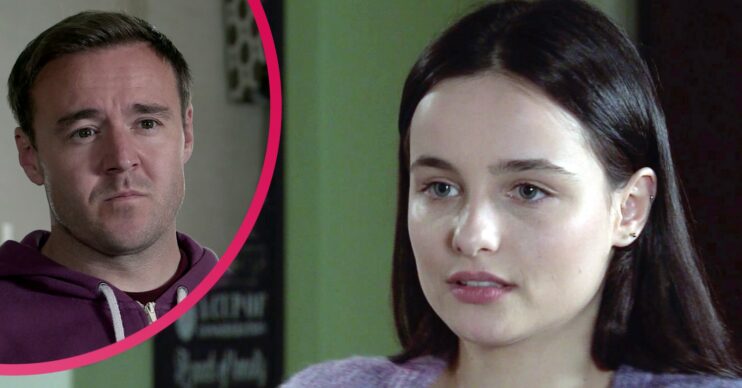 In tonight’s Coronation Street (Wednesday, September 15) Alina packed her bags to leave Weatherfield after revealing she’s pregnant with Tyrone’s child, but is this the last we’ve seen of her?

In tonight’s scenes, Hope refused to go to school so Tyrone and Alina offered to take the day off to look after her.

However when Alina asked Hope to be a flower girl at their wedding, the school girl told Alina that she hated her for stealing her daddy.

Tyrone soon lost his temper with his daughter and stormed out, leaving Alina in the café with Hope.

Alina continued to look after Hope and the little girl soon apologised for destroying the baby’s teddy bear.

Later when Alina dropped her off at Fiz’s, Hope apologised for starting the fire and all the other fires she’s started.

Alina was furious and when she went home, she had a go at Tyrone for keeping Hope’s history of starting fires a secret.

She had a go at him for keeping secrets and Tyrone confessed to Alina that he and Fiz kissed.

When she asked Tyrone if he wanted to get back with Fiz, it was clear he was unsure.

Later Alina was in tears and told Emma what happened, but she also confessed she’s pregnant with Tyrone’s child.

Alina later dumped her and Tyrone’s couple picture at the garage with the word ‘liar’ on it, publicly humiliating him.

Later when Tyrone returned to flat, Emma told him Alina had gone, but asked what they would do about the baby.

She soon realised Tyrone had no idea Alina’s pregnant and he went after her.

Tyrone caught up to Alina and tried to convince her to stay, however she didn’t want him having anything to do with their child.

Unable to convince Alina to stay, she left, but is this the last we’ve scene of her?

Will Alina be in Coronation Street again?

While Alina has left the street, she will appear in the next episode of the soap.

After finding out Alina is yet to fly, he races off to find her and tracks her down to a hotel.

He begs her to reconsider staying in Weatherfield. She makes out it’s over between them, but will she stay?