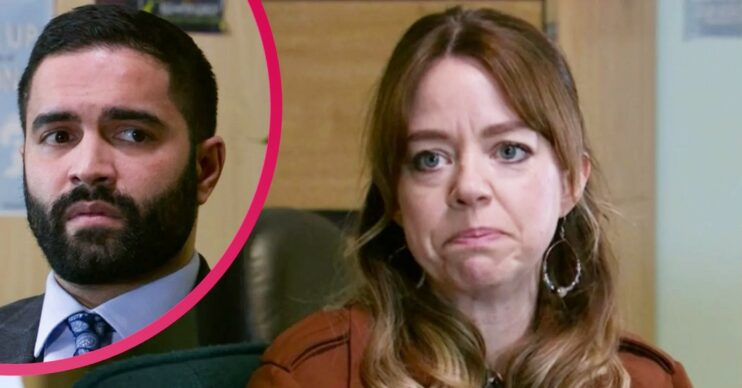 The Corrie star pulled off an incredible performance last night

Coronation Street fans are all saying the same thing about Georgia Taylor after Toyah Battersby’s heartbreak.

The Underworld assistant was forced to give up the chance of being a mum in last night’s episode (April 1).

She found out that partner Imran Habeeb had been lying to her for weeks and was the biological father of Abi Franklin’s son, Alfie.

Abi’s ex Kevin found the birth certificate and sent Toyah a picture of it.

Sadly for Toyah, the revelation came during an adoption meeting for foster daughter Elsie.

And the consequences were heartbreaking.

Toyah attempted to hold it together throughout the meeting.

But when the social worker asked her if she had any concerns about her and Imran adopting Elsie, Toyah couldn’t let his lies go on any more.

“He’s a liar,” Toyah said, leaving both Imran and the social worker stunned.

She added: “He’s already got a son – Alfie. I’ve just found out he cheated on me with Alfie’s mum, Abi. She’s vulnerable.

“She’s a grieving drug addict. He registered the birth this morning knowing he had this meeting, knowing he would have to lie to you and me.

Toyah was broken by what she’d been forced to do – especially after her decade long battle to be a mum.

She went on to break down to her sister Leanne about it all.

Later as she got Elsie ready for bed, Imran came home.

Toyah let him read the little one a story while she went into the living room and silently sobbed.

Georgia’s acting in the scenes blew fans away.

One said: “Georgia Taylor is knocking it out of the park tonight. #corrie #coronationstreet”

A second said: “Poor Toyah! My heart breaks for her. Georgia Taylor has been absolutely amazing tonight.”

A third added: “Brilliant #Corrie @itvcorrie tonight! #Abi #Imran storyline. #Toyah #GeorgiaTaylor is the real deal when it comes to acting too!”