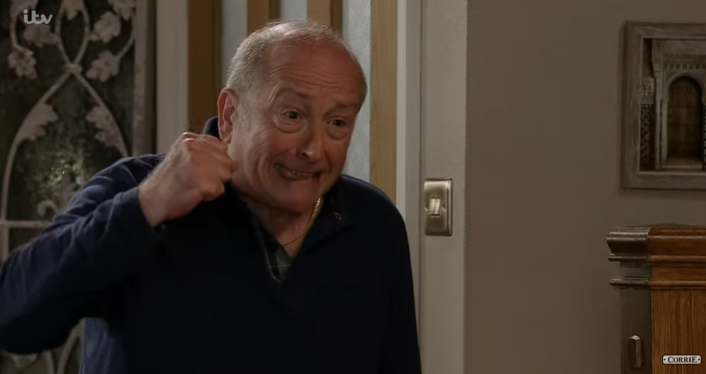 He asked her to choose between them...

Viewers of Coronation Street have begged for Geoff Metcalfe’s “repulsive” coercive control storyline to end, after he forced Yasmeen to choose between him and her granddaughter Alya Nazir.

Alya has been a thorn in Geoff’s side recently, and the former radio DJ has made it clear he wants her out of their lives.

Alya has been suspicious of Geoff for months, and is close to discovering what a vile bully he is.

Geoff makes me sick! I can’t stand him!

Recently, she was troubled to hear that Yasmeen had been left in tears after some of Geoff’s disgusting behaviour, and then she discovered Geoff had been the one sending complaints to Speed Daal about her…

But, when Alya accused Geoff of sending the troll reviews online, he denied any knowledge and Yasmeen sided with him.

Last night (March 11), Geoff told Alya it was obvious they can’t work together and suggested she sells her share of the business to him and Yasmeen.

Understandably, Alya told him where he could stick his suggestion!

She said: “I’ll never hand over something I worked so hard for to a man like you.”

To which he replied: “Okay, I think I’ll do a bit of gardening – got a few nasty weeds to get rid off.”

Later, the master manipulative tried to convince his wife that Alya had to go before she causes the business to go under.

Will Yasmeen choose husband Geoff or her blood relative Alya?

Those watching from home were seething with Geoff’s behaviour, and begged for it to end.

One wrote: “He does my head in. I want to lob my phone at his head but I know I will wreck the telly,”

So do i its repulsive.Its ok to highlight something but to keep shoving down your throats every episode is beyond the pale

My tv is in danger of a heavy object every time this vile little worm disgraces the screen!

Geoff makes me sick!
He gives Yasmeen a compliment & a put down all in 1 & starts going on about the bad reviews that Alya has got online that he wrote!
I can't stand him! 😣#Corrie

Another said: “My TV is in danger of a heavy object every time this vile little worm disgraces the screen!”

A third simply seethed: “I hate this storyline.”

“Geoff makes me sick! He gives Yasmeen a compliment and a put down all in one and starts going on about the bad reviews that Alya has got online that he wrote! I can’t stand him!” blasted another.

One more said: “Comes to a head next I’m told and thank god. For anyone with anxiety, this is hard to watch six times a week.

“Believe the police get involved. Let’s just hope we get to see what laws Geoff’s broken and then it will be worth it to other sufferers out there wanting to break free.”

Do you want this storyline to end? Or do you think it’s an important issue to highlight? Leave us a comment on our Facebook page @EntertainmentDailyFix and let us know what you think!