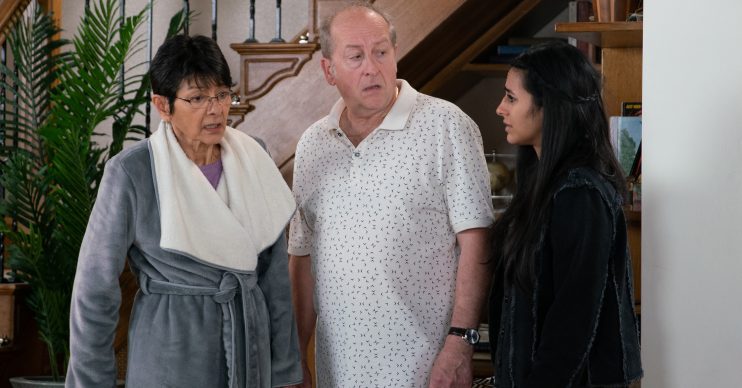 For months Geoff has been abusing Yasmeen in a coercive control storyline.

Not only has he taken control of her money and how she spends her time, it was recently revealed he has been seeing an escort behind Yasmeen’s back.

In last night’s episode of Corrie (Monday, March 23), Yasmeen went to start her shift at Speed Daal, but told Geoff she didn’t feel like coming in as she had “terrible stomach cramps.”

Geoff then told her to go the pharmacy and back home to bed.

Yasmeen’s granddaughter Alya asked what was wrong and Geoff told her Yasmeen had a bad stomach.

Geoff blamed Alya, claiming she was putting her under stress.

However viewers think there’s a much more sinister answer and it’s that Geoff is intentionally poisoning Yasmeen.

Oh no, I bet Geoff is poisoning Yasmeen now…😨😥#Corrie

#corrie omg has Yasmeen been poisoned by Geoff?

not geoff hes killing yasmeen off slowly then #corrie

Later in the episode, Alya and Ryan managed to get Yasmeen round to their flat where two police officers were waiting for her.

Although they had information on Geoff, Yasmeen refused to listen or talk to them.

Next week, it looks like Yasmeen may finally start to see that Alya has been right all along.

Alya questions Geoff about his fake hotel booking but he soon clutches his chest and fakes having a funny turn.

Yasmeen calls paramedics, but they’re unable to find anything wrong with Geoff.

He refuses to go to the hospital for tests, knowing it would expose his lies, leaving Alya and Ryan suspicious.

Oh no, I bet Geoff is poisoning Yasmeen now…

Alya is left furious when Yasmeen announces they’re cancelling their plans to go to Spain.

Later Alya confronts Geoff over the heart attack and hotel booking. When she reveals she’s been to the police, Geoff quickly loses his temper…

Read More: Coronation Street viewers want murderer Clayton Hibbs to be a regular on the show

Geoff turns on Alya and begins threatening her just as Yasmeen gets home from the shops.

Yasmeen orders Geoff to leave Alya alone but he assures her he would never lie and the pair soon make up.

When Geoff is in the bath, Yasmeen reads his emails and finds the ones he’s written to the escort agency, but Geoff soon catches Yasmeen.

Yasmeen is unable to ignore what she has seen. She confronts Geoff.

After he admits he lied, Yasmeen tells him she’s leaving but he blocks her way and tells her she isn’t going anywhere…

Do you think Geoff is poisoning Yasmeen? Leave us a comment on our Facebook page @EntertainmentDailyFix and let us know what you think!