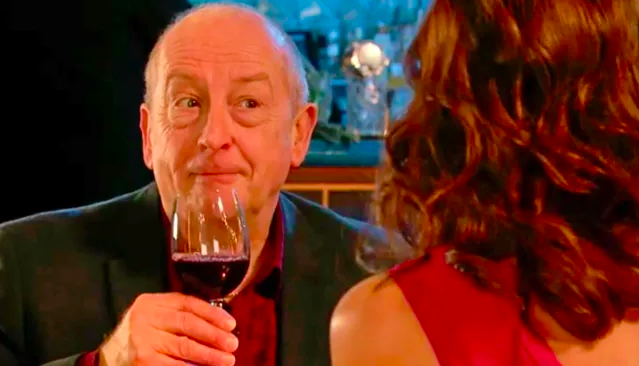 He cheated on wife Yasmeen Nazir

Coronation Street fans want Geoff Metcalfe to get a Sexually Transmitted Infection after he paid for an escort and cheated on wife Yasmeen.

The vile bully stooped to a new low on Wednesday (March 18) in Coronation Street, when he went to a posh restaurant to meet a glamorous woman – all paid for with Yasmeen’s money.

Meanwhile, Yasmeen was seen eating off the floor after another one of Geoff‘s foul rages.

Hope he ends up with the clap.

When Alya looked into Geoff’s past, an online search turned up some incriminating evidence about the Speed Daal worker.

Namely, that he and a past girlfriend had been charged with causing an affray.

When Geoff was out of the house, Alya headed round to discuss her discovery with Yasmeen and begged her to stay in Weatherfield and not leave for Cyprus.

After Alya left and Geoff returned, Yasmeen meekly questioned her husband about the fight he’d had with someone by the name of Jocelyn.

But as soon as Geoff realised Alya had been in the house, he angrily swept Yasmeen’s plate of curry from the table, sending it straight on to the floor.

So terrified of him, a desperate Yasmeen fell to her knees and started to eat the curry.

In extremely distressing scenes, her gaslighting Geoff headed out of the door satisfied that Yasmeen was on her knees physically and emotionally.

After calling his poor wife “disgusting”, Geoff horrified viewers further when he met up with a paid escort, wining and dining her and gifting her flowers.

Those watching from home were repulsed by Geoff’s behaviour, with some hoping he catches an STI from the call girl.

One tweeted: “Hope he ends up with the clap.”

Another said: “Hope she gives him an STI.”

A third went one step further, typing: “Hope she chops it off and throws it out the window.”

hope she chops it off and throws it out the window.

Hope she gives him an STI 😡

Would be wrong for me to post what I hope he gets!

Many others want the character to “die of coronavirus“.

Coronation Street spoilers tell us that the unsettling Geoff and Yasmeen storyline is set to take a turn for the worse.

The next episode of Coronation Street airs on Friday at 7.30pm.

How do you want this plot to end? Leave us a comment on our Facebook page @EntertainmentDailyFix and let us know what you think!