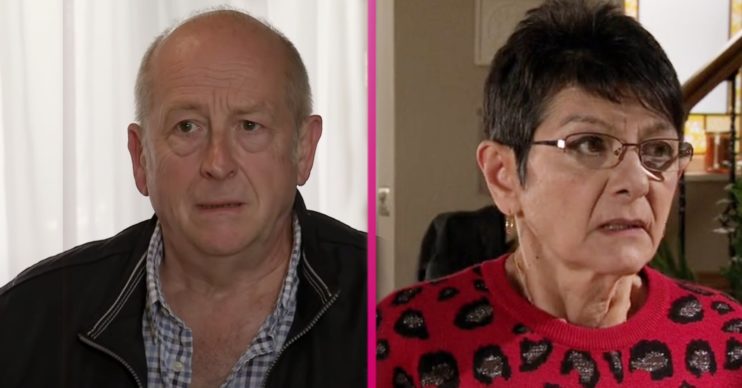 Coronation Street: Geoff falls off the roof of No.6, leaving viewers cheering

Geoff has been abusing Yasmeen for a very long time!

Coronation Street viewers cheered as Geoff Metcalfe fell off the roof of No.6 during a showdown with Yasmeen and Alya.

In Monday’s episode (December 7) Yasmeen was found not guilty of the attempted murder of her abusive ex-husband Geoff. She later reported him to the police for coercive control.

In tonight’s hour-long episode (Wednesday, December 9), Yasmeen was back on the cobbles staying with granddaughter Alya. However Geoff was close by and soon got into the building to torment his wife.

He gave her a short period of time to collect her belongings from No.6 and told her to sign over her half of the house.

Wanting to get her personal possessions, Yasmeen decided to head back to her home. Meanwhile the power on the street was knocked out.

As Alya headed into to Speed Daal, she caught Geoff stealing from the till. She told him she had reported him to the police again and planned to tell them all about his robbery.

Alya also told Geoff she showed his new girlfriend Christine the news reports from the trial, and she had seen also his true colours.

But the radio DJ was furious and hit Alya over the head with the cash box before going back to No.6. Back at the house, he trapped Yasmeen inside.

Geoff told her what he did to Alya and Yasmeen offered to withdraw the complaint if she could help her granddaughter.

But Geoff began to pour lighter fluid around the living room and set it on fire. Yasmeen panicked and ran straight upstairs.

In the attic, she escaped onto the roof but Geoff soon followed. He tried to get to Yasmeen but soon Alya was up on the roof trying to save her gran.

Soon Geoff slipped down the roof. Yasmeen actually tried to help her abusive husband, but he ended up falling into the garden of No.6 next to Yasmeen’s chickens.

However viewers had no sympathy for Geoff and cheered as he fell.

Should not have enjoyed that as much as I did #Geoff #Corrie pic.twitter.com/bvGpn518ts

The whole of the UK when Geoff fell off the roof 👇🏻#Corrie pic.twitter.com/4b3u72B2V2

yesss.. geoff has gone! .. also yasmeen telling him some home truths about himself👏🏼 was a tense scene though! #corrie

I love the way Yasmeen gave it to Geoff before he fell to his death. #Corrie at its finest tonight. A great way to celebrate 60 years!

Read more: Coronation Street: When did the Geoff and Yasmeen relationship turn ugly?

What did you think of tonight’s Coronation Street?