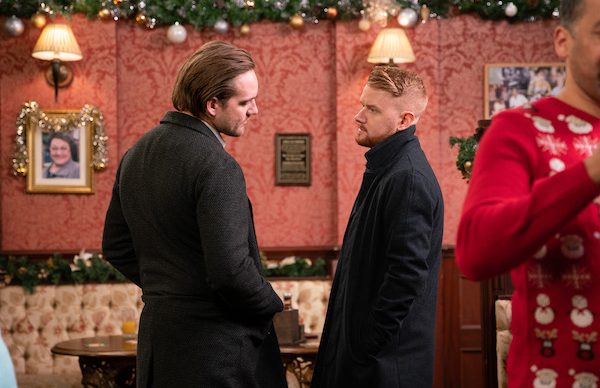 Their feud will turn violent in March

Coronation Street is lining up a huge brawl for Gary Windass and Ali Neeson.

The soap teased fans with a first looking behind the scenes picture from filming the dramatic scenes.

We've been filming Gary and Ali having a bit of a scrap this week! 👊

Will they ever kiss and make up?

It shows a bloodied Gary on the floor as Ali straddles him on top – could the killer builder have finally met his match?

Both actors have huge grins on their faces showing how much fun they are having filming the fight scenes.

The characters have been engaged in a long-standing feud since Gary attacked Ali’s brother Ryan and seduced his girlfriend – and now it’s going to get violent.

Ali tried to warn Maria off Gary and told her about him being a loan shark but she refused to believe him.

Even after the truth came out Maria backed evil Gary over Ali and exposed the latter’s drug addiction to the street.

Actress Samia Longchambon has revealed Maria will turn to ex Ali next week after she suffers a tragic miscarriage – and how she still has feelings for him.

Doctor Ali finds Maria having a dizzy spell in the street and helps her back to her flat before she realises she is bleeding and he rushes her to hospital.

When the doctors break the tragic news to her, Maria’s left with Ali to support her.

Samia said: “It is awkward but at the same time she is pleased because he is a friend and as much as she’s tried to
avoid him there are still feelings there so she is grateful, she doesn’t want to be on her own.

“It all comes back, as soon as the midwife says she’s sorry Maria knows what that means and breaks down. She’s absolutely heartbroken, all the old feelings she had when she lost her first baby come back. She opens up to Ali about what happened last time, it’s a whole new wave of devastation.”

But with Ali supporting Maria while Gary is away in Bristol, her old feelings towards him bubble up again.

She added: “I think she does still have feelings for Ali but she’s pushed them deep down and is trying to make a
go of her relationship with Gary and try and be true to him.”

With both characters being killers – who do you think is in the most danger?