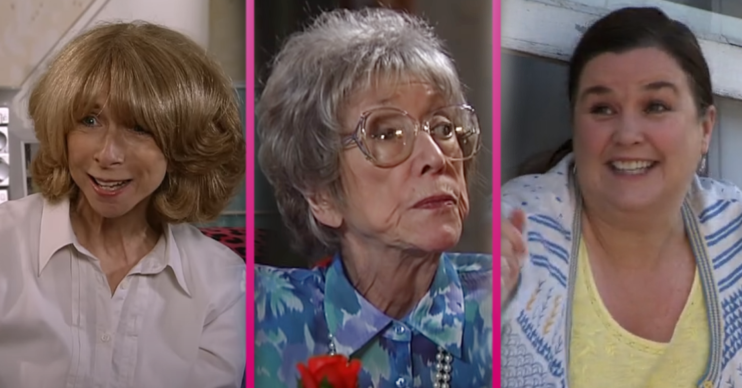 It's time to bring some comedy back to Corrie

Coronation Street is well-known for its gripping storylines, brilliant drama and some of the funniest scenes in TV history.

Over the last year, a lot has been changed with the coronavirus pandemic putting a pause to filming.

And it seems like this could be the perfect time for Corrie to bring back some more comedy moments.

And it looks as though fans agree. On the Entertainment Daily Facebook page, one fan wrote: “Can’t wait! The storylines are really dragging now.”

A second commented saying: “As long as the writers don’t write rubbish.”

Here are 13 hilarious Coronation Street moments that Entertainment Daily soap critic Charlotte Rodrigues, would like to see more of.

1. Schmeichel in the bath

Back when Chesney Brown was a youngster, his best pal was his dog Schmeichel. However the Great Dane could be a handful and hard to control.

So when Chesney, Fiz and Kirk took Schmeichel back to No.5 to give him some food, it was no surprise when he managed to escape Chesney’s grip.

He ran up the stairs and jumped into the bath where Chesney’s mum Cilla and her husband Les were enjoying a romantic evening.

But the floor couldn’t take the weight and the bathtub came crashing down into the living room.

This happened on-screen very recently and we left viewers in stitches.

Recently Mary Taylor ordered a blanket with Ben Shephard’s face on it.

She proudly showed it off to her pal Sean in the factory. Even Ben himself was impressed with the scenes!

After Tina McIntyre was killed, residents had no idea who killed her. But viewers know it was Rob Donovan.

At the time, Rob was dating Tracy Barlow. Meanwhile Rob’s sister Carla was in a relationship with Tracy’s brother Peter. However Peter had been having an affair with Tina and he was looking like the prime suspect.

In this iconic scene, Carla refused to speak to Peter, who was awaiting trial. However Deirdre became so stressed and upset, she ended up taking it out on her trifle.

As the jelly didn’t set, she broke down saying: “Jelly shouldn’t set, it should wobble”, before launching it across the living room at the wall.

Also this was Anne Kirkbride’s final appearance on the show before she died.

In 2004, Sarah Platt was going to marry Todd Grimshaw. However Todd started sleeping with his friend Karl and later confessed to Sarah he is actually gay.

In a truly iconic scene where Gail went to go for Todd, his mum Eileen stepped in and ended up brawling with her instead.

As the two yelled insults at each other about their kids, Gail called Todd a “pervert”.

Furious Eileen gave her a smack and warned her to go home.

But good old Gail jumped on Eileen grabbing her hair. As Todd managed to break them up, Charlie and Jason came along and Gail said the famous line: “Oh here’s the other one, the rest of the village people.”

Gail and Eileen have had some other memorable arguments since, but this one definitely takes the cake!

5. Steve and Tim fight Will in the cab office

When Steve and Michelle were married in 2016, she ended up becoming the wedding planner for her ex-boyfriend Will and his soon-to-be wife Saskia.

But she ended up developing feelings for him. Although Michelle planned to sleep with Will, she didn’t go through with it and the pair only kissed.

However when the truth came out, Steve was furious.Will ended up stopping by the cab office to try and talk to Steve.

Steve was still angry but with his hurt arm, he was unable to fight Will, so Tim stepped in… or at least he tried to.

Tim tackled him to the ground with Steve in the background yelling and pointing, “Go on Tim!”

6. Blanche goes to an AA meeting

Blanche brought a huge amount of comedy to the cobbles. But one of her best scenes was at Peter’s Alcoholic Anonymous meeting.

As someone told their story about how they go into drinking, Blanche didn’t hold back.

She told one of the group members: “I’ve never heard so much self-indulgent whinging in all my life. Is there some correlation between how boring you are and how much you drink?”

No matter how much people tried to calm her down, Blanche didn’t back down.

She told another member they should get out more with the hilarious line: “Wait till you try bingo, you’ll hyperventilate.”

7. Fred’s car rolls into a lake

Back in the 80s, Fred took Bet and Betty for a picnic by a lake. But Fred got upset wanting some time alone with Bet.

As they went back to the car, Bet and Betty got in while Fred put something in the boot.

However he ended up pushing the car and it went rolling down the hill and into the lake.

It’s fair to say Bet and Betty were not impressed.

In the 80s, while he was with Vera, Jack signed up to a video-dating agency. He went by the name Vince St. Clair and dressed up to meet a woman for a date called Carole Munro.

But in a twist, Carole was revealed to be Vera and she confronted her cheating husband.

Everyone in the pub watched as Jack approached ‘Carole’.

When he realised Carole was Vera he backed up and Vera ran after him smacking him with the box of chocolates Jack had brought.

Over the years, Gail Platt has become a popular meme and one of her famous moments, is ‘I love Olives’.

The topic of olives came up in the Platt household and Gail was trying to prove she loves the fruit (yes, it IS a fruit).

As her daughter-in-law Kylie sat in the living room, Gail offered her an olive.

But when Kylie declined, Gail said back to her: “I love olives” before pulling a huge smile and putting an olive in her mouth.

Do you love olives as much as Gail?

Reg once got himself a waterbed and when he and Maureen were about to have some adult fun, they had a knock on the door from Mavis and Derek.

But as Reg warned her to keep quiet, she realised the bed had burst.

Reg was forced to answer the door after Mavis and Derek heard the screams and they told him water was coming through in the Kabin shop.

Maureen was not happy as she was stuck on the bed naked while Mavis and Derek stood in the doorway.

This is why waterbeds cannot be trusted!

In 2005, Fred wanted to help Audrey find a place to put her statue in her garden.

However the ground opened up beneath him leaving him hanging on for dear life. The firemen eventually got Fred out of the hole.

While Fred may not have found it amusing, it was hilarious for viewers.

When Norris walked in on a sleeping Rita, he believed she had died.

Not sure what to do, he told Sally, Jack and Blanche in the shop that she had died.

As four of them approached a motionless Rita on the sofa, she ended up waking up screaming.

Leave us a comment on our Facebook page @EntertainmentDailyFix and let us know what you think! Have we missed any of your favourite funny moments?