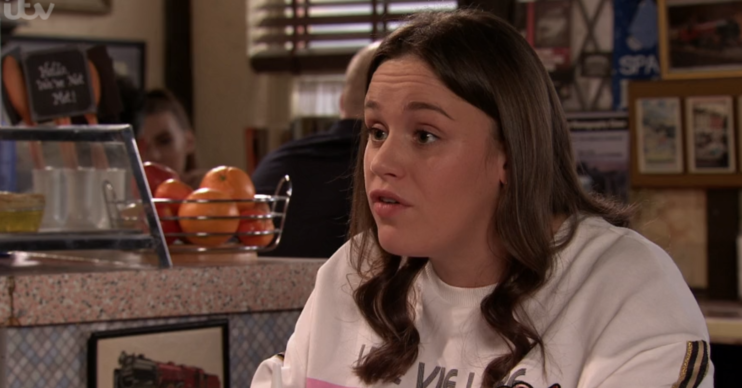 Geoff has been turning people against Yasmeen for a long time

Coronation Street fans have turned on Faye Windass as she has started to side with her grandfather Geoff Metcalfe.

But it seems like she’s just another innocent victim of manipulative Geoff’s evil plot.

Whilst Geoff’s wife Yasmeen is in prison facing an attempted murder charge after months of abuse, Geoff has been spinning lies, making Yasmeen out to be the abusive one.

But despite his attempts to get people on side, his daughter-in-law Sally isn’t convinced he’s innocent.

In last night’s episode (Wednesday, June 17) Faye and Geoff had breakfast in the cafe together and she asked him why he had to move out.

Read More: Samia Longchambon posts snap of first day back at Coronation Street as she does her own hair and make-up

Geoff explained that Sally made it clear he was no longer welcome to live with them and that’s why he went back home.

The teenager was furious with her stepmother. She soon started having a go at Sally and Tim on the street for chucking out Geoff.

Fans were annoyed with Faye for siding with Geoff, especially as she once didn’t believe her mum Anna about villain Pat Phelan.

#Corrie …faye obviously inherited her dad Tim nice but dims view on grotesque Geoff … hopefully not much longer before all including Tim nice but dim and Faye get the whole truth! pic.twitter.com/83f776B2IP

#Corrie Geoffs got Faye end of his puppet strings now. He’s strategically manipulating whoever to make himself the innocent victim. God I hate Geoff 😬😬😬😬

#Corrie Evil manipulator Geoff getting Faye on his side.

Faye is just like her dad believing Geoff. #Corrie 🙄

What will happen next for Faye and Geoff?

In Friday’s episode (June 19) Alya tells Imran how she suspects Sally kicked Geoff out because underneath she knows that Yasmeen is innocent. She tells him that they need to get her on board.

Meanwhile an angry Faye packs her rucksack and tells Sally and Tim she’s moving in with her grandad to show her support. Tim’s furious with Sally but Geoff feigns sympathy.

However, with Faye now living with Geoff, will she be able to see his true colours?

Fans know Geoff deleted the hidden camera footage from the night Yasmeen attacked him. But could the young waitress end up recovering the footage somehow?

Who else is against Geoff?

Sally isn’t the only one who doesn’t believe Geoff. Yasmeen’s granddaughter Alya was suspicious about Geoff’s behaviour for months.

Meanwhile Imran, who is Yasmeen’s solicitor and family friend, also believes her side of the story.

It has also become clear that Eileen, Roy, Evelyn and Carla are all unsure of Geoff’s side of things. Will they be able to prove Yasmeen is the victim of abuse?