Michelle and Alya fell out after Michelle was offered a job

Viewers of Coronation Street have turned against Alya Nazir as she continued to argue with Michelle Connor over work.

A couple of months ago, Alya asked Ryan and Michelle for help when it came to catering for an event.

Michelle and her son agreed to help and client Ray was so impressed he ended up using their services again.

However, things soon turned cold between Alya and Michelle when Ray offered Michelle a full-time job as his events manager across all of his hotels.

Ever since Alya and Michelle haven’t been on the best of terms as the Speed Daal worker felt Michelle had stabbed her in the back.

But things haven’t been going swimmingly for Michelle after Ray made a pass at her.

In last night’s episode (October 2 2019), Alya was thrown when she came to visit boyfriend Ryan and saw Michelle in the flat.

Questioning why Michelle wasn’t at work, Ryan explain that his mum wasn’t in the mood and “threw a sicky”.

Continuing to prod for answers, Alya asked Michelle why she called in sick and Michelle told her she had a lot going on.

Read More: Coronation Street cancelled for ONE WHOLE WEEK because of Euro 2020 football

Michelle told her she had already apologised for what she had done but Alya was quick to jump in saying she stabbed her in the back.

The events manager soon lost her temper telling her she wasn’t in the mood and Alya quickly left the apartment, leaving Ryan stuck in the middle.

Michelle isn’t the only one who was annoyed by Alya’s behaviour as viewers have also become fed up of her constantly picking arguments with Michelle. 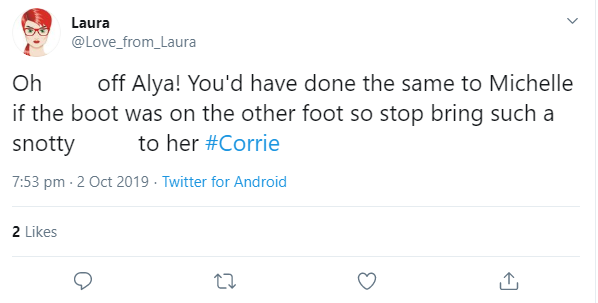 #corrie @itvcorrie yeah Alya wind your neck in, disgraceful way to speak to your bf's mum. You wouldn't step foot over my door lady!

Not sure who is more annoying. Alya or Michelle. 🙈 #Corrie #CoronationStreet

Alya is such an unlikeable character #Corrie

Can someone drop kick Alya now or?! #Corrie