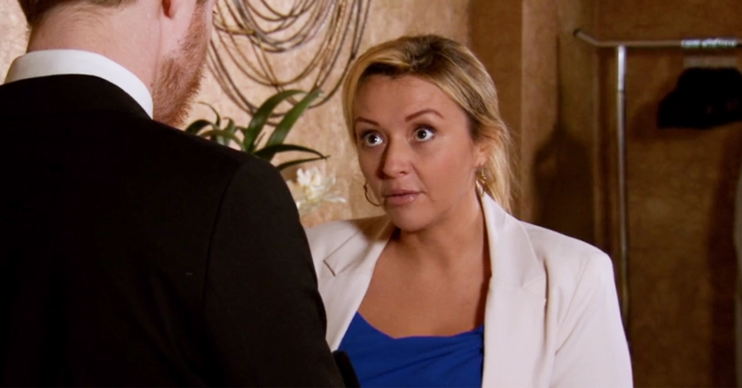 Last week, Nicky made her first appearance as she introduced herself to Daniel Osbourne.

But immediately fans noticed there’s something familiar about Nicky – she looks like Katy.

Speaking on a Digital Spy forum about the new character, one fan wrote: “And Nicky looks too much like the character Katy Harris who appeared in Coronation Street years ago.”

A second commented: “Nicky has potential, but as @owen10 mentions, her uncanny likeness to Katy Harris is distracting.”

A third said: “She looks exactly like her only with blonde hair.”

She looks exactly like her only with blonde hair.

Another added: “I agree, plus she sounds like her and has a similar pushy and forward personality! Stick an unkempt spiky wig on her and she would be Katy!”

Coronation Street: Who is Katy Harris?

During her nearly three years in Weatherfield, she began a relationship with Martin Platt and ended up getting pregnant.

Furious that Martin had got her pregnant, Katy’s dad Tommy persuaded Katy to get an abortion by telling her that her boyfriend was cheating on her.

When Katy discovered the lies her father told, she confronted him in the garage of No.6 and hit him over the head with a wrench, killing him.

Katy and her mum Angela tried to cover up the murder by making out Tommy was killed by an intruder. But Angela ended up getting arrested when forensic evidence pointed to her committing the crime.

Unable to live with the guilt, Katy wrote her confession in a note and took her own life.

Lucy and Kimberly both appeared on Hollyoaks

While both Lucy and Kimberly have both had roles in Coronation Street, they’ve both also been in Hollyoaks.

Lucy has played Donna-Marie Quinn in the Channel 4 soap on and off since 2018. Meanwhile Kimberly appeared in the show earlier this year as Maxine Minniver’s mean landlady Beverley.

Do you think Lucy and Kimberly look alike? Leave us a comment on our Facebook page @EntertainmentDailyFix and let us know what you think!