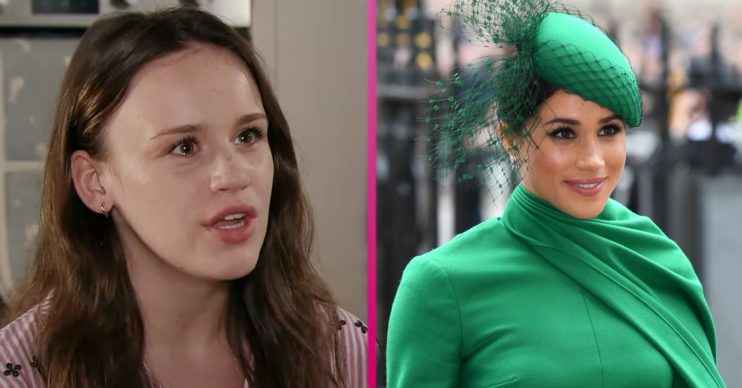 Faye is played by Ellie Leach

Over the last year, viewers have seen Geoff and Yasmeen’s coercive control storyline play out with the Radio DJ abusing his wife. However he’s been telling people Yasmeen is the one who abused him.

Faye has been seen on-screen a bit more over the last few weeks as she has been standing by Geoff, who is her grandad.

But as she’s making more appearances, viewers have started to claim she looks a lot like former actress and Meghan Markle.

Ellie Leach (Faye) has the looks of Meghan Markle #Corrie

Faye is played by actress Ellie Leach. Ellie joined the ITV soap in 2011.

Meghan is well known for her role in American legal drama Suits. However she went on to marry member of the British royal family, Prince Harry.

Harry and Meghan married in May 2018 and became the Duke and Duchess of Sussex. A year later in May 2019, they welcomed their son Archie.

Ellie Leach (Faye) has the looks of Meghan Markle.

However Harry and Meghan announced earlier this year they would be leaving the royal family and moving to Los Angeles.

Coronation Street: What’s next for Faye?

Earlier this week, Faye saw Geoff arguing with a woman in the ginnel. However what she didn’t know is the woman is her grandmother, Tim’s biological mum, Elaine.

In last night’s episode (Wednesday, August 5), Faye asked her grandad who he was arguing with. But he claimed she was some random woman who didn’t keep her distance and coughed on him.

Although she initially believed him, she overheard Geoff tell the police he hadn’t argued with anyone.

Is she now suspicious of Geoff?

Do you think Faye and Meghan look alike? Leave us a comment on our Facebook page @EntertainmentDailyFix and let us know what you think of this story.