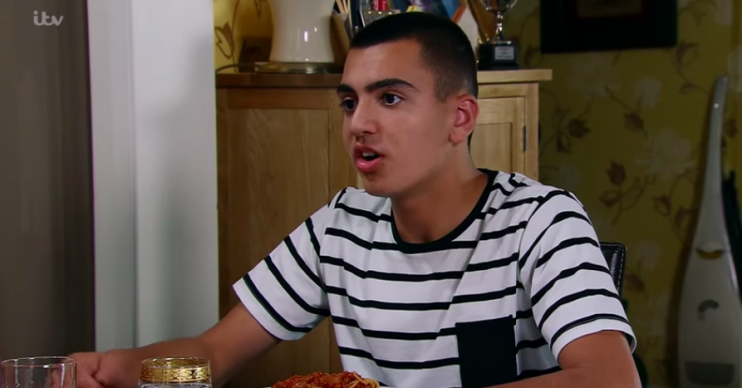 Viewers got a shock Friday night when the old Aadi appeared

The schoolboy was played by Zennon Ditchett up until March this year when he decided to leave to focus on his education.

New actor Adam Hussain took over the role and quickly settled in.

Fans were confused at first – convinced Aadi had somehow aged a decade over night – but have now accepted Adam as Aadi.

However last night that was all thrown up in the air when they spotted Zennon in the background of a scene.

In a scene from the episode set in Dev’s house, there was a photograph of Aadi and Asha on the wall clearly visible.

There are also other photos throughout the house that have yet to be updated by the props team.

“Old Aadi lives on in the pictures in Dev’s house,” said a fan noticing the picture.

Actor Adam has had roles in The Bay, Fertile Crescent and Ansentia before landing the role in Corrie.

He has been friends with his now on-screen twin Tanisha Gorey for years.

About joining the show, he said: “I am excited to play the role of Aadi, putting my own twist on him as the character becomes involved in an important new storyline.

“I was already good friends with Tanisha Gorey, before coming to the Street, which hugely helps with portraying the bond of brother and sister.”

He added: “Everyone at Coronation Street has been so welcoming, bringing me into their family and treating me as one of their own.

“I have always associated Coronation Street with togetherness which is so important at this time.

“Having already filmed the start of the story before we had to stop production I look forward to returning as part of the amazing team who bring entertainment and joy to the screens across the nation.”

Did you spot old Aadi back? Leave us a comment on our Facebook page @EntertainmentDailyFix and let us know what you think!