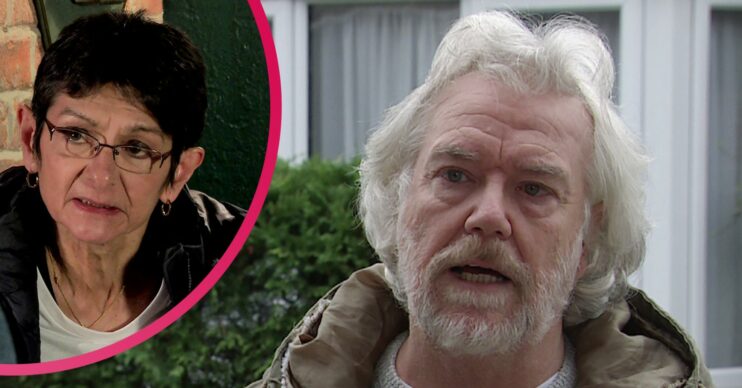 Coronation Street fans are predicting Stu Carpenter could be a serial killer after it was revealed he has been to prison in Monday’s episode (May 2 2022).

Stu ended up arrested after a police officer believed he was trying to break into the wholesalers.

However when he was let go it was revealed Stu had recently been in prison, and fans think they know why.

Stu first appeared in the soap last year and was living on the streets.

He built up a friendship with Kelly Neelan as she also found herself homeless.

When Kelly went back to living with Gary and Maria, she helped Stu out by helping him secure a job at Speed Daal.

Stu soon moved in with his boss, Yasmeen Nazir.

In Monday’s Coronation Street scenes Stu realised he hadn’t ordered in any food for an event at Speed Daal, he asked Ken for a lift to the wholesalers.

However when he got there the wholesalers was shut due to the bank holiday.

Soon a police officer saw Stu and believed he was trying to break in and Ken was his getaway driver.

Later Stu was let go as it appeared Yasmeen told police she instructed Stu to go to the wholesalers and made him promise not to come back without her delivery.

The police officer said Yasmeen seemed like a nice lady and stated: “Makes you wonder what she’s doing put her trust in a fella with your record. You’ve not been out long have you?”

Immediately fans wanted to know what Stu had done, with some coming up with the theory he’s killed someone.

On Twitter, one fan wrote: “Stu will likely have been a murderer, so he doesn’t feel left out with five or six others living in the street.”

A second tweeted: “Stu has suddenly become a thief and a con man. What’s betting he’ll be a serial killer by next week?”

Another added: “Yes Yasmeen, Stu will turn out to be a crazed psychopathic murderer, just like Geoff. Bin him while you can.”

I bet he's the Wetherfield Strangler…