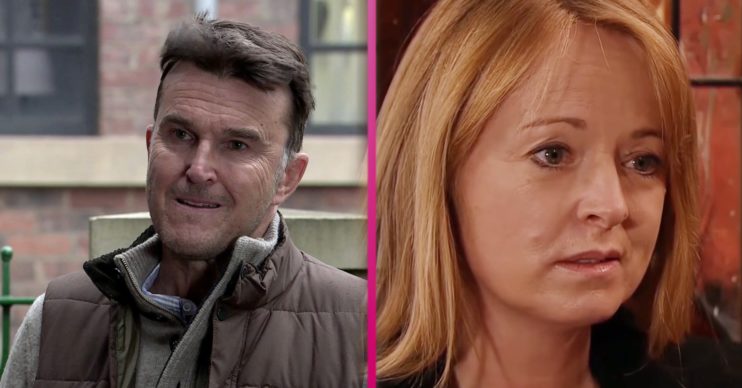 Johnny has got on Scott's bad side

Coronation Street fans are predicting an affair for Scott and Jenny after Johnny told Ray all about Scott’s past.

It was recently revealed that Scott ended up going to prison many years ago for a crime both he and Johnny committed.

In last night’s episodes (Monday, October 12) Johnny wasn’t impressed to learn his former partner in crime would be sticking around Weatherfield to work for Ray.

So in an attempt to get rid of him, he told businessman Ray that Scott had been to prison and was bad news.

And it turns out Johnny was right to warn Ray, as Scott was planning to rob him.

Later, Scott let Ray go from the job and said it was because of what he had been told by Johnny.

Furious, Scott told the Rovers landlord he would now have to help him with his job robbing the Bistro. However viewers think he’ll take his revenge in another form.

Over the last few weeks Scott has been flirting with Johnny’s wife Jenny. Fans are predicting he will have an affair with her to get back at his former crime partner.

Is Jenny going to have an affair with Scott? #Corrie

Are the #Corrie writers paving the way for Scott to wreak his revenge on Johnny when he finds out about the Ray Crosby sacking by having him take his flirtation with Jenny to the next level? pic.twitter.com/wJIOlVHnM7

Coronation Street: What’s next for Johnny and Scott?

This week, Scott tells Johnny that his job is to drive the getaway car and if he doesn’t comply, he’ll blab to Jenny.

Johnny tries to avoid Scott by making out he’s at a brewery event. But Johnny warns if he doesn’t pay ball, Jenny will get chapter and verse and his unsavoury past.

Next week, Scott talks Johnny through the plan to rob Ray and his mates. But Johnny is sick with worry.

Jenny presumes it to be his MS and books them a few days in the Lakes to rest. When Scott finds out, he menacingly orders him to get out of it.

Johnny feels terrible as he lets his wife down. Scott reminds him that if he doesn’t play ball, he’ll tell Jenny that he was once involved in a robbery and left a man to die.