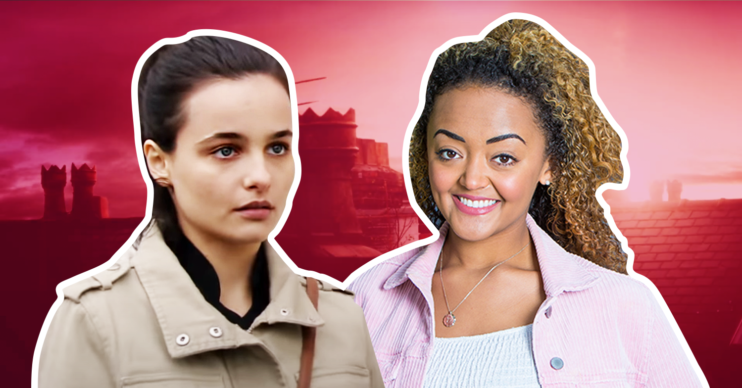 The two women have been on screen a lot together recently

Earlier this year, Alina moved into a flat with her ex-boyfriend Seb and Seb’s new girlfriend Emma. However Emma and Seb have since split and now he is living with two of his ex-girlfriends.

But in recent weeks Alina and Emma’s friendship has blossomed and in last night’s visit to the cobbles, they seemed to be spending a lot of time together.

Read More: Coronation Street: Will Yasmeen be caught out over her illegal phone?

The two women spent some time together in the pub and Emma told her new friend how her auntie Tina died after hitting her head on a concrete hanging basket.

As they continued to talk about Emma’s aunt and shared their concerns for Seb, who has been upset after finding out his siblings are moving away, fans started to wonder if Alina and Emma could become more than friends.

Emma and Alina sitting in a tree #Corrie

Hope it becomes more than that .

me watching emma and alina like a hawk waiting for a sure sign that they’re going to get together #corrie pic.twitter.com/4rTHC2L7NO

they’re gonna fall in love PASS IT ON

While we don’t know a huge amount about Alina’s past love life, we know Emma has been unlucky in love during her two years on the cobbles.

Hope it becomes more than friendship.

In 2018, she briefly dated David Platt after he dumped his girlfriend Shona. However David had been raped by Josh Tucker and was struggling to cope.

Emma later went on to date Chesney Brown, but they also split when she realised he had feelings for her friend Gemma Winter.

She then went on to date Seb. But similar to what happened with Chesney, it became clear that he still had feelings for Alina and she ended things with him.

Although fans seem set on Alina and Emma getting together, it seems Alina also still has feelings for Seb.

Will Alina and Seb get back together? Or could Alina and Emma’s friendship develop into something more?

Do you think Emma and Alina should be together? Leave us a comment on our Facebook page @EntertainmentDailyFix and let us know what you think of this story.