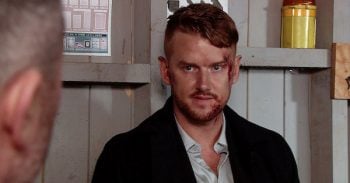 Gary has made some enemies on the cobbles this year!

Fans of Coronation Street have predicted Gary Windass will be killed off on the show’s 60th anniversary next year.

Viewers have seen Gary go from bad to worse over the last year.

He was the one who sabotaged the factory roof which claimed the life of Rana Habeeb on her wedding day to Kate Connor.

I do think the Gary situation is heading towards a climax for the 60th.

A couple of months later he ended up killing loan shark Rick Neelan and became a loan shark himself, using a furniture shop to cover his real job.

Read More: Coronation Street viewers divided as Vicky is revealed to be ALIVE and working with Michelle

In a Digital Spy forum fans discussed what they would like to see happen in the soap in the next year.

A couple liked the idea of killing Gary off for the show’s 60th anniversary.

One fan wrote: “Gary getting killed for the 60th would be better than Christmas. Leading to several characters having an uneasy Christmas.”

A second said: “I expect the Gary plot will run until the 60th and go roughly the same way as these style of plots usually do.”

A third added: “I’m not entirely convinced Neelan is dead so I think he could enter back into the equation.

“However I think the past will catch up with Gary and everything will come to a head in December for the 60th anniversary.”

Another commented: “I wonder if we’ll see Ali and Gary’s worlds collide more in 2020, given the dodgy contacts Gary has, I could see the Ronan situation rearing its head again.

“I do think the Gary situation is heading towards a climax for the 60th. Given that Ryan is supposed to start ‘working’ for Gary again this week.

“I also wonder if they are heading toward Ryan either helping Ali bring Gary down, or Ryan betraying Ali – either of which would be quite interesting.”

Another wrote: “We’ll obviously have a few big stories hit their climax on the actual anniversary week itself – I can see Gary’s crimes and misdemeanors featuring a lot here with him potentially getting his comeuppance or him being bumped off in a whodunnit with the killer being revealed during anniversary week.”

One fan even suggested Kate Connor could return to get revenge on Gary for causing Rana’s death.

They wrote: “I’m going to wind you all up by suggesting Kate Connor should make a brief return a-la Anna Windass/Phelan style.

“He took the most from her by killing Rana, even inadvertently, and even wrecked her life, she left the street with no idea what he did so a cameo in 2020 to get rid of this awful character would at least make the ending to the storyline decent.”