Gary Windass put the 'ow' into Halloween last night, when his costume left Coronation Street fans in shock at his 'golden pouch'.

On Thursday (October 31), some of the residents of Weatherfield celebrated the annual spookfest with a children's party at the Dobbs house - but it was Gary's outfit that provoked the biggest response. 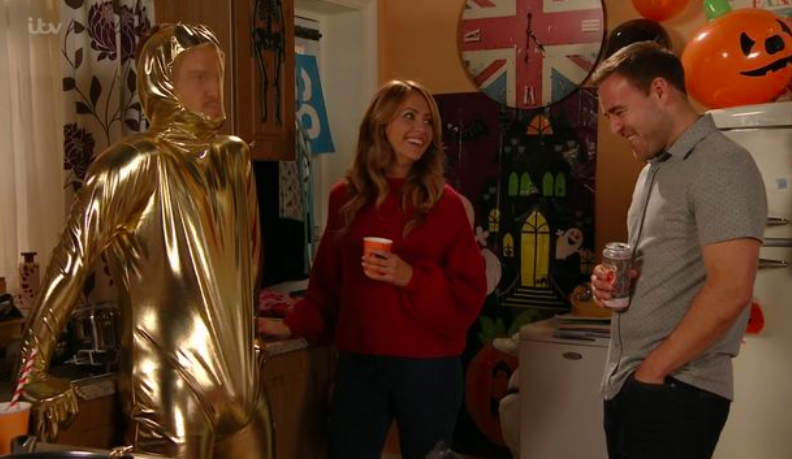 The cobbles killer left soap fans speechless when he showed off his, ahem, rather large bulge in a gold onesie.

The builder-turned-loanshark walked into the children's party wearing the very revealing outfit and provoked a big laugh from Maria Connor.

Maybe not the reaction he wanted from the object of his affections. But when Evelyn clapped eyes on him, she said: "Good God man, put some trousers on, there are children present."

Good god man, but some trousers on, there are children present.

He went on to explain that he had come dressed as an Academy Award, but the shiny gold outfit couldn't have been any further away from the classy ornament famously referred to as an 'Oscar'.

He also shared the fact he was wearing a cricket box down below. 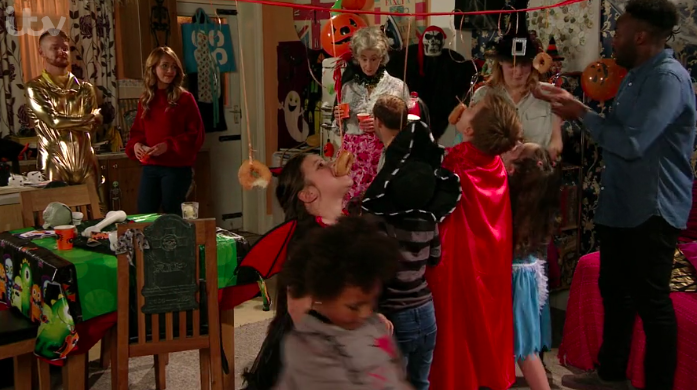 Later, as the kids played Halloween games, Maria turned to Gary and said: "Gold's always been my colour."

To which Gary flirted back: "Well, if you want, I can wear it again tomorrow when I take you out for lunch."

And he reminded her "there are kids present".

Maria did agree to go on a date with Gary, but will she come to regret it? Probably!

Nobody needs to see the Windass lunchbox 😳 #Corrie

Oh wow. You can see EVERYTHING in Gary's outfit 😂😂😂 #Corrie

Sorry, but what is Gary Windass smuggling in those gold trousers?! #corrie #coronationstreet pic.twitter.com/oE8eI6vJKH

What you packing there Gary? #corrie

#Corrie Gary! Can you put it away!!

Those watching from home may never recover from the memory of Gary's outfit however, with one tweeting: "Nobody needs to see the Windass lunchbox."

Another said: "Gary's costume is a bit inappropriate."

A third remarked: "Sorry, but what is Gary Windass smuggling in those gold trousers?!"

Despite appearances to the contrary, viewers know that Gary is in fact a cold-blooded killer, so Maria shouldn't be fooled by the comedy outfit.

Do you think Gary Windass is an integral character in Corrie? Let us know on our Facebook page @EntertaimentDailyFix.