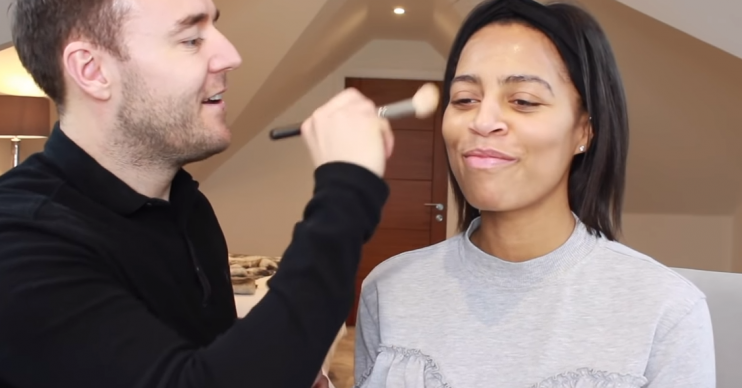 Fans of Coronation Street have been left in stitches as Alan Halsall, who plays Tyrone Dobbs in the ITV soap, did his girlfriend Tisha Merry’s make up in a new video.

Tisha, who played Steph Britton in the soap from 2013 until 2018, posted the video to her YouTube channel.

She told her fans: “You guys wanted to see more of Al, you have been requesting that for a while so we thought we would do a challenge.”

She then explains they were doing the ‘my boyfriend does my make-up challenge’ and also mentioned Alan had been doing his research in preparation for the video.

Alan started the video by putting primer, foundation and concealer on Tisha before doing her eyebrows.

You two are brilliant! I couldn’t stop laughing!

He then moved on to do her bronzer, eyeshadow, more concealer, eyeliner, lipstick, more bronzer and mascara.

Tisha showed off the finished look and Alan joked he would enjoy going for a coffee with her.

Fans loved the video and were in stitches at Alan.

One wrote: “He was really playing the part of a make-up artist wasn’t he? Lol he actually did a pretty good job. Your reaction to the brow application was my favourite. Great video idea.”

Another commented: “Omg laughing my head off!”

Another added: “You two are brilliant! I couldn’t stop laughing!”

Recently on her YouTube channel, Tisha hinted her alter ego Steph could return to Weatherfield.

Meanwhile, Alan has been on the show since 1998.

Currently his character Tyrone and girlfriend Fiz are being investigated by social services after their live-in nanny Jade made false claims Hope was being abused.

His daughter Ruby and stepdaughter Hope have been taken into care, but this week the family are told the girls can come home – as long as Fiz moves out while investigations continue.

Will they ever be able to put their family back together?